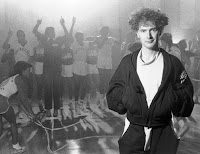 I only met him once – about 13-14 years ago, at London’s Café de Paris, aptly enough, it being some event in honour of his son Joe – so I won’t pretend any deeper understanding; but old McLaren certainly helped to liven up my youth. His best testaments, I reckon, are Julien Temple’s The Great Rock and Roll Swindle (1980), in which he was very funny (‘Helen, never trust a hippie…’), so revealing his own distinctive performative streak; and Duck Rock, the fabulous record he made with Trevor Horn in 1982-83. Horn told some very bemusedly funny tales around that time, about sitting in one of New York’s priciest studios watching McLaren hopping about, them both listening to hours of African drumming, dollars draining away with every second… He’d already heard Malcolm’s efforts at ‘singing’, so even a genius of Horn’s stature must have wondered if this record was going to work... Well, it did, it was a beaut – witness 'Soweto' – and not thanks to McLaren’s musical 'talents', but his gift for bringing good things together and joining them up, which used to be called 'sampling' and which we all now do with our computers and what have you.
On last night’s Newsnight Jeremy Paxman, who’s paid to scoff at everybody and possibly scoffs at his own kids, scoffed through an obituary in which the most patently ludicrous detail seemed to be McLaren’s championing of something called ‘hip-hop’. Well, one glance at the video for 'Buffalo Gals' and it all comes back - just how clever McLaren was in that department. He was, in the spirit of the age, an impresario and packager of ‘the street’ and what we learned to call its ‘subcultures.’ When he was knocking around Hollywood in the mid-80s, dating Lauren Hutton and trying to produce movies, his major project was said to be called 'Surf Nazis Must Die.' Good grief, I thought then. Having since learned a lot more about the hardcore Malibu surfing scene, from Sean Penn and others, I think McLaren’s instincts were as bang-on as ever. But he wasn’t cut out for America. He was very English, and somewhat European. And like a lot of ostensibly shocking and edgy artistic types, he wound up looking and sounding a bit stuffy and high-flown at times, but they do do that, don’t they? ‘Sex Pistols’ - that’s what he chose to call that mob of surly, spotty delinquents, and such blatant cheek should always be cherished.
Posted by Richard T Kelly at 02:54:00 No comments: Links to this post

Masters 2010: Watson walks in the sun 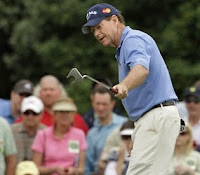 I’ve never been to Augusta National, Georgia, and I don’t reckon I’ll be going. They’re sniffy about membership, as is the right of any club, but they also have a special history of offensive racist arrogance. Moreover, their current chairman, this pompous windbag called Billy Something-or-Other, seems to think he can pronounce formidably on Tiger Woods’ failures as a husband and professional. As Jason Whitlock of the Kansas City Star puts it unimprovably, ‘Who knew God made a high horse low enough for Billy [Something-or-Other] to saddle?’
(The Woods Affair shows that America still retains a weird Puritan streak – a need to confess, to parade conscience, an inability to recognise its own fallen state, smell its own BS, and just live with that, however imperfectly.)
Where was I? Oh yeah, Augusta. Yes, wouldn’t want to go there, but whenever I see it on telly it looks like a Disney matte painting of a dream golf course – lush turf, white sands, stone bridges over glass-like ponds, dappling sunlight and shadow…
I first watched the Masters in 1979, when the winner was 'Fuzzy' Zoeller, one of the tour’s 'characters', who in 1997 celebrated the historic victory of Tiger Woods by joking freely about fried chicken and collard greens on the champion’s dinner menu. In 1980 Seve Ballesteros, whose swashbuckling looks were as improbable in their own way as Augusta itself, won it by a country mile. In 1981 the winner was my main man, Tom Watson.
This morning’s first round Masters leaderboard sees Watson vying up there with Fred Couples, Sandy Lyle, Bernhard Langer in touch too… Hold on, what freakin’ year are we in, 1985? How come Craig Stadler and Ben Crenshaw are so far back?
It appears Watson is graciously trying to leave us, his avid fans, with a better memory than the bitter blow of his final-hurdle failure at last year’s Open. This time, he really can’t hope to stay in the hunt – yesterday the pins were kindly placed, the ball sat up invitingly on the fairways, the wind and rain stayed away, and all that can’t last – but it would have a certain elegance if Watson could stick around the upper echelon of the board this week.
BTW I don’t know what Watson thinks about the smelly hypocrisy of Billy Something-or-Other but in 1990 he did resign his 20-year membership of Kansas City (Mo.) Country Club, the place where he learned the game, because the club refused the application of a Jewish businessman. Billy, there are indeed some people out there with principles, and you could learn some yet.
Posted by Richard T Kelly at 01:42:00 No comments: Links to this post 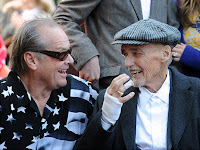 Sad to read of the apparently terminal illness of Dennis Hopper: the Man from , one of the most edgy and compelling figures in post-war American cinema, both as a quite inimitable actor/artiste and an occasional, thwarted director. (The recent picture to my left of Hopper and Jack Nicholson is (c) Harrison/Getty.)
I do believe I first caught sight of Hopper as the cannily cast philosophical-drunk father to Mickey Rourke and Matt Dillon in Rumblefish (1983.) But it might have been in Out of the Blue (1980), which he also directed – a simply, shatteringly brilliant picture about punk rock, nihilism and dysfunctional family life. This early 1980s moment was the point where Hopper finally got sober and career-minded after decades of terrifying bad craziness – the lost years of Taos, New Mexico, the elopements, the heavy dope, the blowing oneself out of a chair with dynamite. As a veteran of that era once began a story to me (and, really, one need say no more) – ‘Dennis Hopper came by the house, raving mad...’
By 1985 Hopper was, in the words of a Hollywood friend of mine, ‘not the same gunslinger’, his tortuous sobriety so tightly maintained as to give offence to Charles Bukowski when the two met to discuss Hopper’s directing Bukowski’s script Barfly. Then came Blue Velvet (1986), in which Hopper acted out a beautifully stylised, vicariously thrilling version of his former lunacy as refracted through the dark glass of David Lynch. Career-wise, Hop was back: ahead lay Speed, Waterworld and what have you. But we shall not forget Rebel Without a Cause, The Last Movie, The American Friend, Tracks, Apocalypse Now, River’s Edge et al.
I’ve had the privilege of talking to Hopper on a couple of occasions, first in 2002 for the sake of my book about his friend Sean Penn. and then in New York in 2006 (when he was accompanied by his wife Victoria Duffy) – that discussion in respect of an autobiography he was minded to write, subsequently acquired for the US by Little, Brown and for the UK by Weidenfeld & Nicolson. The provisional title was Out Takes. I wonder now if we can still hope to see this book, at least in part if not in whole?
The tome Hopper was contemplating was not some chronological plod through the annals but, rather, a memoir galvanised by especially charged moments and meaningful scenes from his life – some of them already the stuff of notoriety/legend, others previously personal. It was all set to be a classic American Life & Times: Hopper and I talked about Dylan’s Chronicles, and his admiration for the deftness of Dylan’s prose in conjuring time and place as well as his own creative process. I suppose we must now see if the fates are kind, and what Hopper has in mind to leave behind as testament.
One memory that I personally will always treasure: Hopper, on learning that I was published by Faber and Faber, leaned close to me, eyes shining as they do in his greatest movie moments, or – once in a while – in post-rehab interviews where he fondly recalled the demonic power of Amanita muscaria. But what Hopper wished to share with me in that day was how deeply he admired the work of Faber’s founding father, T.S. Eliot. ‘I should have been a pair of ragged claws’ – Hopper recited precisely, with low-burning fervour – ‘scuttling across the floors of silent seas...’ Now there’s an audio-book I’d buy in a second. Long may you rave on and on, Senor Dennis.
Posted by Richard T Kelly at 16:45:00 No comments: Links to this post

NUFC back to Sky Sports Div 1: Get in, you bassa

Gareth Harrison puts it unimprovably over at True Faith: "You know that when Nolan is able to compose himself for a perfectly placed overhead kick in the opposition’s area that things really are going your way but it was a poetic way to put the cap on our promotion. The chances of him being able to stop, light a tab and spank a goal like this in against the likes of Vidic and Vermalean are reasonably limited but hey, let’s enjoy it while it lasts."
Pragmatic musings, too, from NUFC.com: "Rather than the scenes of mass jubilation that were reported by TV and press sources though, our take on proceedings was more one of quiet satisfaction... Let's not forget that the blow we have recovered from was self-inflicted. To sum it up in one word, relief."
Posted by Richard T Kelly at 15:42:00 No comments: Links to this post