Richard T. Kelly's 'Lucie Gunn' - Coming Soon to a Theatre Near You...

...in my dreams. And yet there have been crazier notions, and this one at least is acquiring a certain substance. For one thing, today I made it into the industry bible Variety for the first time in relation to the fiction-writing side of my activities - in this case, an original screenplay of mine that's just been earmarked for Film Council backing, much to my delight and all-round gratitude:
"Public funding body the U.K. Film Council has unveiled 18 debut pics that will receive a total of £297,750 ($445,000) from its development fund. Pics include scribe Bola Agbaje’s bigscreen adaptation of her coming-of-age play Gone Too Far!... Other projects include Catherine Shepherd's Like a Virgin, Natasha Wood’s Rolling With Laughter, Richard Milward's Apples and Richard T. Kelly’s Lucie Gunn."
The still herewith is from Looking For Mr Goodbar (1977), a whimsical choice but not totally inapposite, given that Lucie Gunn is described in the UKFC's press notes as "an intense and seductive drama exploring the power games that men and women play in and out of the bedroom."
Here's to Lucie then. A hell of a girl.
Posted by Richard T Kelly at 14:27:00 No comments: Links to this post

I note an interesting online write-up from a book club who (cf. Jonathan Coe) rejoice in the name of 'The Rotters Club': lately it seems the group have been mulling over both Crusaders and Engleby by Sebastian Faulks, in tandem. That's a whole lotta pages - must have been their 'state-of-the-nation' month. I gather that the readers much preferred Faulks; they thought Crusaders was 'wide in scope and ambition, but loose in having too many characters: its central one, The Reverend Gore, not having enough magnetism.' Still, I'm interested in the judicious closing remarks:
'We all agreed that it was refreshing to read a novel set elsewhere than London and would work well as a TV mini series.'
(Well, they might yet speak truer than they know.)
'It would be interesting to read the novelist's second novel to evaluate any development.'
(Said novel is still at least 18 months away from stores. But it'll mark a change of tack, for sure.)
'Harry Airborne', presumably the group's chief blogger/spokesperson, is frank and rather gracious: 'I probably would not have got past the first 100 pages of Crusaders -it reminded me of Zadie Smith’s White Teeth with its proliferation of characters and unwieldiness - but another member urged me to persevere and I am pleased I did. More JF, who advocated it, had a mastery of the text and clarified the motive of Steve Coulson’s support for the church, whilst another countered my view that the denouement was not too coincidental.'
Obviously I wouldn't have wanted to earwig every last bit of this debate, some of it would probably have stung a bit, but clearly I'd have been pleased to hear those staunch defenders of mine near the end. As I've said before, readers' groups are a great thing in our society, and I'm really pleased to have found my way onto another reading list of this kind.
Posted by Richard T Kelly at 14:09:00 2 comments: Links to this post 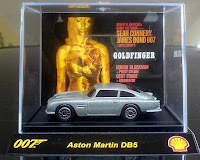 For the November issue of Esquire I interviewed the formidable and admirable James Bond producer/gatekeeper Barbara Broccoli, mainly on the fairly rich topic of marketing of and product placement within the Bond movies. Naturally we talked a fair bit about Aston Martin; that firm’s long and fruitful relations with the Bond franchise; and the special enthusiasm for Bond of its current CEO Dr Ulrich Bez, himself a keen connoisseur of speed and gadgetry. The blue-chip, look-and-dream-but-don't-touch lustre of the Aston Martin brand is what has made it such a useful partner to the Bond enterprise. ‘Aston Martin don’t have a huge advertising spend’, Broccoli told me, ‘because they sell every car they make before it’s made, people are so desperate to buy.’
It seems that last year Aston Martin sold 7,300 vehicles. This year they expect to shift 'only' 6,500. Thus today the firm announced it was cutting 300 full-time and 300 temporary jobs, around one-third of its UK staff. ‘Like other premium car brands’, said Dr Bez, ‘Aston Martin has been forced to take action to respond to the unprecedented downturn in the global economy.’ Christmas break had already been extended a fortnight, which was rather a black crow of an omen. Unite has, naturally, pointed out that this spells ‘a bleak Christmas’ for those laid-off.
Is it worse to lose one’s job right before Christmas, or first thing in the New Year? Which has the most piercing effect on one’s personal and familial morale and the management of one’s household finances? I fear a lot of us are about to be told, if not to find out very directly.
Posted by Richard T Kelly at 15:36:00 No comments: Links to this post

Hillary Rodham Clinton: she was right all along...

... as it turns out Barack Obama doesn't know what he was talking about on the great matter of foreign policy, and so has appointed Mrs Clinton as his Secretary of State. This irony is not entirely at the President-Elect's expense. But on the mundane personal level, sad to say, all the mental energy I (and many others?) expended in willing Mr Obama to the Democrat nomination - thus (I, or we, imagined) to break the Clintonian dynastic hold over this unprincipled shambles of a Party - was a waste, and a culpably naive one at that. I don't know who Obama thought he was fooling in welcoming his 'dear friend' HRC to the microphone today, and I hope he knew how silly and calculating he looked. The biggest problem to start considering as of now is exactly how practically ill-qualified is the self-proclaimed Superwoman of the 3AM Phonecall for the job in front of her. On a level beyond argument, in his thorough and consistent trashing of her application at Slate, Christopher Hitchens argues that 'it's difficult to see Sen. Clinton achieving confirmation unless our elected representatives are ready to ask a few questions about conflict of interest.' But then Reuters simply reports that 'all the nominees are expected to win quick confirmation by the Democratic-controlled Senate.' This the end of that, then?
Posted by Richard T Kelly at 15:05:00 No comments: Links to this post

The Internet Archive: a work in progress

Last week a friend introduced me to the Internet Archive, a 'digital library' which looks a bit like an inchoate history of the Web and a bit similar to a tried-and-tested paper archive in terms of its non-judgemental gathering of interesting bits of stuff that future generations might care to rummage. First and obvious thing to strike the eye last I looked - the Kennedy/Nixon debate of 1960.
Posted by Richard T Kelly at 02:13:00 No comments: Links to this post

Middlesbrough 0 Newcastle 0: Not the champagne stuff, then

It's another point on wor travels but clearly our generally bottom-six standard of form continues, even if tonight we sit one spot above the bottom three just on goal difference, as Sunderland took one of their more peculiar spankings at home to Bolton.
I’m glad we have Viduka back – he’ll be sluggish for a game or two, and will need his shooting boots re-heeled, but given a run of games the big man (if arsed, that is) worries defenders and gets goals. Will Kinnear have the wit to follow Keegan and play Marco, Martins and Michael in the sort of attacking triangle that skinned Spurs (away) near the end of last season? Otherwise choosing an attack duo is a bother. The traveling fans at Burra booed when Viduka came off the bench for Martins, who’d looked pacier and livelier than Owen. Oba himself was down the tunnel like a shot, which is a worry.
In other news Big Sebastien Bassong is winning big props – may he abide. But Jose Enrique would probably be on his way in January were it not for our problems on the left.
Posted by Richard T Kelly at 13:10:00 No comments: Links to this post