BBC4 has been building up a superb library of documentaries about rock ‘n’ roll music, and has just aired another one, English Soul, devoted to the career of Steve Winwood. Still, I’m struck by how many of these docs tell the same sociological story, i.e. how in 1960s England a lot of young lads – mainly working class or petit bourgeois, mainly from the north and the midlands (or, yes, the outskirts of London) – wanted very much not to do what their Dads had done. That willed difference is an old story, yes, but in the 1960s it had a brand new outlet in popular music.
Moreover, these lads’ Dads (or Mums) quite often had musical instruments about the house – the working-class way of making your own entertainment and all that. But whereas Mum & Dad were raised on music-hall and might conceivably have appreciated Lonnie Donegan or Cliff Richard, the key to the needful difference was these lads' youthful worship of black American music and musicians, the love of blues and R&B, the desire to imitate its sentiment, its feel, its authenticity. Thus Eric Clapton in the BBC4 doc, remembering how he marvelled at the vocal skill of the young Steve Winwood – that he could sing like that, as opposed to what must have been his actual life experience. He ‘sounded black’, ‘like Ray Charles.’ (The doc went on to reveal that 60-ish Steve now talks with the clipped vowels of a long-time multi-millionaire country gent, whereas his brother Muff is still a cast-iron Brummie.)
When I was at the age (17) that one has a ‘favourite song’, quite often something a bit moody/melancholy, the one for me was ‘Can’t Find My Way Home’ by Blind Faith (which I first heard over the end credits of Kevin Reynold’s terrific movie Fandango, sadly neglected now as it was then.) The song was written and sung by Steve Winwood. When Winwood was 17? Well, he was enjoying knocking The Beatles off the top of the pop charts with ‘Keep On Running’, recorded with The Spencer Davis Group. And – you get my theme – when I was 17 Winwood was enjoying a solo US number one with ‘Higher Love’, a pop-'soul'/dance tune that rhymed ‘fire’ and ‘desire’ and was packaged in the Arif Mardin mode of the day whereby everything – keyboards, horns, drums – sounded programmed and spring-loaded and utterly inorganic… except for the voice.
After ‘Higher Love’ for Winwood came ‘Roll With It’, another sing-a-long hit that, if I remember right, was licensed to advertise Michelob beer. I well remember Keith Richard giving his hoarse opinion of the ambition of that record to Rolling Stone at that time: ‘Ahh, come on, Steve...’ In English Soul Winwood talks half-apologetically about ‘going along with things’ for commercial reasons at various points in his career. He was a prodigy, so he was doubtless offered at least as much as he could initiate creatively. What size of an artist has he been? The definitive answer is presumably in the new box set Revolutions. For my part I confess I prefer a master songwriter/musician who sings his/her own stuff, however flawed (cf. Warren Zevon, who actually covered Winwood’s 'Back in the High Life', albeit a little awkwardly) to a great singer who settles too much into familiar grooves and co-authored lyrical clichés. But for Winwood’s Blind Faith songs alone – also ‘Sea of Joy’ and ‘Had to Cry Today’ – on top of all the Traffic stuff and the solo material – I admit I remain a keen fan.

This World Cup is getting good, people. Argentina were admirably patient tonight in their disposal of Greece, inspired by their entirely-correctly-rated talisman, whom the coach properly kept in the starting XI ("I think it would be a sin", Maradona told the press, "not to give Messi to the people, to the team...") Brazil and Portugal showed their essential beauty to best advantage the other day. Holland are safely through and capable of better. I keep everything crossed for Germany and for Spain. Right then, who’s left…?

Sean Whelan, blogging from the World Cup for NUFC site True Faith, is presumably one Mag who’s shouting for The Ingerland, if we judge by the ‘we’ in his screed below. But on that basis his opinion of David Beckham’s presence on the England bench can be taken as less one-eyed, or more rounded, than mine (which is that Beckham is, quite clearly, one of the most disastrous liabilities ever to appear for England at (5!) major finals.) But forget me - come in, Sean:

‘David Beckham is p***ing me off. The players must be getting annoyed with him. If you’re not playing well, you don't need that self-obsessed whopper moaning on the bench. He's only there for his own benefit, he needs to be seen at the World Cup to promote the Beckham brand. He's a footballer, not a chief executive, so why wear a three-piece suit? Hair immaculate, the bloke's a w***er. He stopped being a serious footballer when he left Man Utd 6/7 years ago to become a bit part player at Madrid. As for going to America, well, it's a joke. He should be doing what Paul Scholes and Ryan Giggs are doing at Man Utd. Scholes shows Beckham up for what he is; a flash c*** - more concerned with fame and fortune than football. I wish we had a Roy Keane in the squad just to grab that perma-tanned phoney by the throat and tell him how it is...’
Posted by Richard T Kelly at 15:35:00 No comments: Links to this post 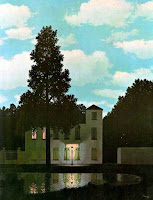 A great friend of mine once told me feelingly how much he hated arranging his family’s summer holiday too far in advance: ‘You get it booked then you wait and it never comes’ was his existential complaint. Thus, the burden of hope and expectation that falls on an English summer, and the shadowing sense of inevitable disappointment - some of which I find myself feeling whenever I see Magritte's famous 'Empire of Light' (pictured).
This morning London bathes in high June heat, pools of shade and light glinting off any exposed hard surface. It’s the longest day of the year, and for me that always comes too soon, feels like a premature curtain drawn down on the possibility of ‘Summer.’ ('Dark nights coming now, just you watch...') But maybe it’s part of the process, the turning of the earth, the subjective experience of Time.
21 years ago this month I sat my Eng Lit A level paper, composing my no-doubt deathless responses to a set of classic texts that included The Great Gatsby: the sort of novel a young person should read regardless of curriculum, and which will linger in the mind of any reader. Today is the day in the calendar when I always think of that enviable nameless sylph at one Gatsby soiree who says:
"In two weeks it'll be the longest day in the year... Do you always watch for the longest day of the year and then miss it? I always watch for the longest day in the year and then miss it."
I only wish I could be so negligent… For me, though, the tenor is more in line with Tom Waits as ‘Benny’, the ponderous soda fountain proprietor in Francis Coppola’s Rumblefish – my favourite movie when I was 14, and still a cracker, I assume:
"Time is a funny thing. Time is a very peculiar item. Y'see, when you're young, you're a kid, you got time, you got nothing but time. Throw away a couple of years here, a couple of years there... it doesn't matter. Y'know? The older you get you say, "Jesus, how much I got left? I got thirty-five summers." Think about it. Thirty-five summers..."
That many? Still, what are we waiting for?