Alan Johnson, MP and memoirist, in conversation with me in Dulwich on September 29 2016 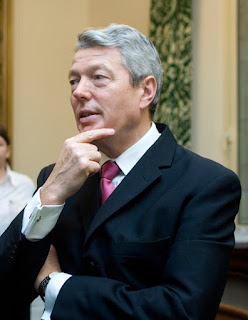 Rated by certain wise heads as the Prime Minister we ought to have had circa 2009, Alan Johnson has won an alternative and arguably more gratifying distinction for himself as a bestselling and prize-winning memoirist. Following This Boy and Please, Mr Postman, he is poised to publish a third volume of life studies entitled The Long and Winding Road, this one carrying his story into the echelons of trade union leadership, election as a Labour MP and a number of stints as government minister. Johnson will be discussing his life and works with me in a special event organised by Dulwich Books at 7pm on September 29, at All Saints Church on Lovelace Road, West Dulwich.

There's a good piece in today's Financial Times by Robert Shrimley, in which Johnson is compared with the former Sunderland South MP Chris Mullin, who has also turned his hand to writing with distinction and who, like Johnson, manages the feat of being a politician who is a recognisable human being. Shrimsley credits Johnson with 'the common touch; an easy manner that belies his intelligence and his hard upbringing.' He goes on to argue:

'At a time when the public is increasingly alienated from the archetypal politician, especially those who seem to have spent their entire life in political activity, the need for able, moderate leaders with a demonstrable human touch has never been more pressing.'

I do take issue with the grounds of this so-called public 'alienation'; and I don't think politicians need to beg for their characters if they didn't happen to come from a tough and unpromising background. It's a fact, moreover, that people with the most obvious human qualities still might struggle with those aspects of political leadership that call for something of the devil's work. And it's quite clear that Alan Johnson, for his own perfectly good reasons, never really wanted to take a crack at the job of leading Labour. Still, however forlornly, I rather wish that he had - just because the road not taken might have been one of the several that could have steered us clear of our present wreckage.
Posted by Richard T Kelly at 04:17:00 No comments: Links to this post

Total Politics: The Knives explains life in government "better than anyone in recent times"


I was delighted to note this very involving, detailed, personal piece on the Total Politics site by James Frayne, in which he describes The Knives as ‘a startlingly accurate glimpse into the life of a secretary of state’. Observing that ‘everything about life in government departments pressures politicians to behave in ways that are reactive and short-termist’, Frayne proceeds to assert that The Knives ‘explains this better than anyone in recent times’ and is kind enough to credit me for particular authenticity on a specific number of counts.

I take this as well-informed opinion because James Frayne was director of communications for the Department for Education between 2011 and 2012, working for then-minister Michael Gove, having come from employment at a number of lobbying and PR firms. One of these was Portland Communications, founded by Tim Allan, close colleague of Tony Blair while Blair was Labour leader. (Recently Portland had the amusing distinction of being accused by some halfwit cultists of Jeremy Corbyn of having ‘incited’ the latest formal challenge to Corbyn’s risible pseudo-Labour-'leadership'.) Anyhow: from the DoE Frayne moved on to the Policy Exchange think tank in 2014, and now runs his own consultancy, Public First.

The story of Gove's controversial tenure at Education was drafted and rehearsed continually even at the time: there will be a definitive account in due course, I'm sure. Meanwhile, in noting from his own Whitehall experience that ‘politicians make many decisions on the basis of competing pressures’, and must endlessly face ‘flak’ that ‘comes at short notice and demands an immediate response’, Frayne certainly gives a sketch of modern politics that I recognise from my researches.
Posted by Richard T Kelly at 03:32:00 No comments: Links to this post

There was a fair old Faber novelist-slam went on last Thursday night in South London. The superb Dulwich Books, now under the inspired management of literary agent Susie Nicklin, hosted readings from and conversation between Louise Doughty (author of Black Water and soon-to-be-telly-smash Apple Tree Yard), Francis Spufford (who has moved formidably into fiction with Golden Hill), Harry Parker (whose Anatomy of a Soldier has been one of the year's major debuts), and myself, representing The Knives.

Before we got down to it, we sat as four for a pre-match interview with Lesley Strachan of Wandsworth Radio, and her adroitly edited version of that symposium can be listened to here.

Afterward we cracked open some prosecco: the 'fizz' part of the billing, which I was all for. It was a lovely evening, at a terrific shop, in front of an excellent audience who asked some striking questions. If I look a bit perplexed in the photo it's probably just because somebody had enquired after my opinion of Liam Fox.
Posted by Richard T Kelly at 02:52:00 No comments: Links to this post

The morning of Saturday September 3 I was pleased to be asked onto BBC Radio London's Robert Elms show, always a lively and enjoyable slot. Dotun Adebayo was sitting in for Robert, and he and I had a good old chat about The Knives and politics etc.

But really the iPlayer repeat is worth a listen just for the bits where Dotun, evidently struck by my account of the book's depiction of political enmities and back-stabbings, gave abrupt and pretty rip-roaring renditions from Julius Caesar and Romeo and Juliet.