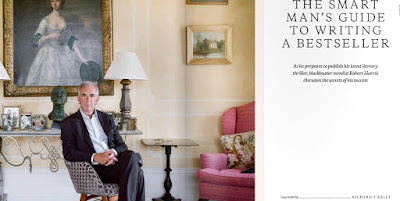 I yield to no-one in my appreciation of Robert Harris's writings but, to be fair, he has millions of readers and I wouldn't want to quarrel with all of them. Suffice to say, I had the privilege of an early read of Harris's consummate new novel Conclave, out on September 22, as well as an early sit-down with him regarding the book; and the results of that dialogue are spread lavishly over six pages in the current issue of Esquire - not online, but a snip this month at £2.50.

The interview focuses on a particular theme for the delectation of Esquire readers: by what mixture of craft and ingenuity has Harris achieved his fairly singular success in delivering a succession of intelligent and sophisticated 'high-concept' bestsellers? The mix of ambition and accomplishment leaves me in awe, frankly. It's a great tribute to Harris that he wears success so lightly round his person.

And he is, I must say, a very personable and highly fascinating man to talk to - about books, for sure, but about anything, really. The Esquire piece runs to 3000 words, for which I am much indebted to editor Alex Bilmes. There were a few exchanges that proved, in the end, not totally essential to the piece but by which I was very struck, and which might intrigue Harris fans, too. I reproduce these below:

RICHARD T. KELLY: 2016 has obviously been a big year in politics. Is truth stranger than fiction? Does a novelist have to struggle to keep up?

ROBERT HARRIS: Oh, truth is far more interesting than fiction, always. In my novels whenever there’s something outlandish, grotesque, defying the imagination – that is the truth, and around it my own second-rate prosaic imagination has provided a sort of paste-setting for these jewels of fact... Really, all I’m trying to do in my novels is to present the facts but make them more interesting – looking at them from another angle...

RTK: How important to you is that business of deciding the point-of-view from which you narrate the novel?

RH: Graham Greene said the key to any novel is deciding perspective. And if you find the point of view from which to see it, that really is nine-tenths of the job. If the subject matter is absolutely vast, sometimes you have to find your way through it by narrowing the perspective. The Cicero trilogy is 25 years of tumultuous Roman history – if you try to do it from lots of points of view you just get lost and it becomes a history book. Whereas if you make it very personal, then you can reduce it to a comprehensible level. Through one pair of eyes it becomes exciting and interesting. I think of it as like being lowered into a cave with one of those flashlights on their head, looking around...

RTK: Do you think historical fiction has a message for our own times?

RH: Popular fiction is often a bellwether of what’s on people’s minds. Historical fiction can be as contemporary as something set in Shoreditch last week, because it just reflects our current preoccupations. I wondered why I’d written three novels about the decline of the Roman republic, and then along comes the Brexit vote and all that followed, and suddenly you can see – there was something in the air about our institutions not being so sturdy as we’d like to think.

RTK: What sort of parallels do you see between Ancient Rome and today?

RH: Here and in America and all around the world, a collapse of faith in institutions and elites which inevitably finds expression in the rise of extra-parliamentary movements outside the mainstream. The Brexit vote seemed to me a rebellion against the established order. Jeremy Corbyn is a rejection not just of past Labour governments but the parliamentary process itself. The Labour Party was meant to be a parliamentary institution to make its way through the system, and that’s breaking down. Donald Trump is a rejection of ‘the system’, as is Marine Le Pen and so on. You see all that in the end of the Roman republic – the occupation of the forum, the hatred of the senate... The moment you say it’s legitimate to intimidate people and set up an alternative power centre, then the power drains away from your existing constitution.

RTK: Were there novels you read as a young person that influenced your idea of what the novel could achieve - that made you want to try it yourself?

RH: I remember the afternoon as a teenager when I read George Orwell’s 1984, that was a very big moment in life. I knew my mental horizons had been enlarged. I’d always been interested in politics, and Orwell was passionately interested in the politics of the world around him. but now this was politics plus imagination – ideas elevated to another plane by creativity, like a rocket escaping the gravity of the earth. Orwell was a brilliant journalist, probably the finest essayist in English, but I can almost guarantee you he wouldn’t be read today if he hadn’t applied creative imagination to his ideas, if he hadn’t written 1984 and Animal Farm...