Labour: The vastness of the North devours us 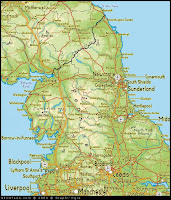 The last days, the bunker days... and tonight BBC1's Question Time fielded a quite conspicuously skewed-right-of-centre panel, there to jump up and down on a cut-out of Gordon Brown, cheered to the hilt by a rowdy audience. But, then again, since Harriet Harman was the allotted speaker for Labour, I was indeed minded to vote for Anyone But.
So, has this been as ghastly a day for Brown as his detractors would desire? The Lockerbie blowback continues, and for sure the Government's inability to say what it thought about Scotland's choice (and why) is rather shameful. As for the Baroness Scotland - the debacle serves her right, though I wouldn't have wanted her to go until her high-handed third-rate attempt at an apology - like the expenses thing, can none of these people feel the gorge of their own hypocrisy rising up to flood their throats?
Shriti Vadera? Well, I see Robert Peston rides in manfully to say that her new job is all of a piece with Gordon's wishes. And I hope that is so, because the vultures of the press were squatting over that story all bloody day long, hoping perhaps that Vadera would flounce out in high dudgeon and give Gordon a hard boot in the sporran on her way out.
I admire Charles Clarke MP and can't argue with any of what he said the other day. I admire the serial Brown-basher John Rentoul too, have done ever since reading his outstanding biography of Tony Blair, but while I find it noteworthy that Rentoul "admired [Blair] more at the end of his time in office than he did at the beginning" (since I did too), I rather feel he's now going a tad overboard on this same sentiment. Still, I remain his fan, and we are likeminded too in wanting Alan Johnson for Labour leader.
But what really preys on me is this headline today from the FT: "Labour’s support in north collapses." Without serving up any hard data from their new research that I can see, the paper nonetheless warrants that "The Tories have built a narrow four-point lead in the north, eradicating the 19-point Labour lead in the region that underpinned Tony Blair’s last general election victory." Dear me how, the shame of it. I suppose it partly depends on how you define The North. In the Spectator David Blackburn looks at things in the round, arguing "the evidence that Middle England is not fully behind Mr Cameron will cause a few headaches in Central Office. But if the Tories win in Newcastle, a marginal victory in Redditch is of no consequence."
Had away, bonny lad. I guess conceivably the Lib Dems could turn their municipal success in Newcastle into a dominance of Tyneside's Westminster seats too. But the Tories? Truly I would gan to the top of our stairs. Not that there aren't Tories in NE1, mind you - but in the main they either travel by chauffeur or hide behind mansion walls; and that has never seemed quite sufficient to win a polling majority.
None of this, I know, is any comfort to Brown, or "The Wolf", as I ought really to call him were I to extend the entirely regrettable WWII analogy of this post's title and opening lines, occasioned probably by there being a new biography of the appalling Alan Clark going round... Divvint get wuh started on that one.
Posted by Richard T Kelly at 15:26:00 No comments: Links to this post 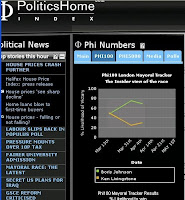 Every day for about the last 18 months I've been clicking on PoliticsHome.com to get their digest of the day's main news and news-related comment, curated and sorted in links gathered from across the gamut of the daily UK papers.
While moving about the site I've tended, too, to take a gander at their live, rolling bulletin board of what they rate as the best blog posts on politics - the calibre of which is decidedly more variable than the print-standard news, but quite often refreshingly candid and original, when not ravening for the ascension to power of Her Majesty's current Opposition...
The sort of Web 'aggregation' practised by PoliticsHome happens to suit both my ideological mindset and reading habits these days: I speak as someone who takes the FT when out and about but otherwise finds the other daily papers a bit demographically skewed, irksomely predictable in that sense, and generally incapable of satisfying the real range of one's interests in the current affairs. The pick and mix of PoliticsHome makes for an enviably diverse reading experience, though, of course, all it is doing is enabling a promiscuous cruising of the fruits of the writerly/reporting labour of others. On that score, for a long time I've been of the guilty feeling that papers need to be extracting exchange value for the content they make available online; and so I back what I suppose we must call the Murdoch position on this matter.
Anyhow, much of the foregoing was instantly outmoded as of today by the resignation from PoliticsHome of its editorial chief Andrew Rawnsley, this in response to... oh, I'll just let the BBC explain:
"Deputy Conservative chairman Lord Ashcroft has bought a stake in the grassroots website ConservativeHome. ConservativeHome and its non-partisan sister site PoliticsHome will both be part of a new media company in which Lord Ashcroft owns a 57.5% stake. ConservativeHome editor Tim Montgomerie said he was "satisfied" with assurances the peer did not want to interfere with the site's editorial policy. But PoliticsHome editor-in-chief Andrew Rawnsley has resigned. Mr Rawnsley, who is also associate editor of The Observer newspaper, said he took the job on the basis that PoliticsHome was "clearly independent of any party both editorially and financially". He told the Guardian: "It was essential for users of the site that they could feel absolute confidence in the political independence of PoliticsHome. I do not believe that can be compatible with being under the ownership of the deputy chairman of the Conservative Party."
Am I just being Minerva's owl now when I say that for quite a while I had been feeling that PoliticsHome was a bit too cosy to the Cameron project in any case? Maybe all I was picking up was that tiring and oft-noted NuBlue tinge to most UK politics coverage online - evidence if nothing else of the part-effectiveness of Cameron's 'modernising' of 'his' party.
In fairness it's PoliticsHome (through the medium of the aforementioned blog-roll) that has enabled me tonight to easily follow the course of its own regrettable 'becoming the story', as a hefty chunk of its cross-party-sympathy Panel of 100 analysts have duly resigned in sympathy with Rawnsley's concerns. But, nonetheless, per those very concerns, for me as a reader it now must be 'Goodnight Vienna' (or 'Goodnight Saigon'?) too. Anybody know of another good current affairs aggregator out there?
Posted by Richard T Kelly at 15:42:00 No comments: Links to this post