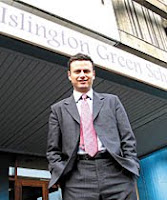 Not my words, those, but my old student newspaper editor Peter Hyman's on tonight's Newsnight - a show that has an increasingly ragged, tendentious, feckless air to it in these bunker days that we're living through. Hyman surely reflects a Blairite consensus that would include, inter alia, the likes of his fellow former PM-speechwriter Phil Collins, John Rentoul with his AJ4PM campaign, and the retiring Stephen Byers MP of North Tyneside. But the midnight hour is nigh - can anyone be found among the Parliamentary Labour Party with sufficient backbone for the bloody work being proposed?
How bad could it be for Labour if the Party is electorally annihilated on Brown's watch? If he leads then he will lose, for sure - but how ruinously? One shudders a little at the thought of the floating voter weighing his feelings on another 5 years of Gordon's doughty individual conscience. And could Brown stick around after defeat and play a Michael Howard-like role in helping the team find a new young winning captain? Doesn't seem remotely likely, does it? No, the odds suggest he'd be off in high dudgeon as of May 31, still believing he was right, while Cameron got the removers round. By that measure, yes, Brown should take the bullet now, for all of our sakes.
Like John Rentoul I admired Blair more by the end of his premiership than at the start, when I found it hard to look at him, never mind listen. In that 'final act' swansong period of Blair's he made the stunning observation that, in respect of the century-old split in Labour's origins between proletarian ILP and namby-pamby Fabian, he felt himself to be naturally amidst the party of the former. That he could say this, whether or not he believed it, was part of my creeping regard for him.
His admirers are generally a less breathtaking lot. Last week as I watched Sally Keeble MP on Newsnight effectively warning Brown not to (further) estrange the middle-class Mumsnet crowd over the axing of subsidised childcare for kids of 2-years-plus, I felt ancient, decrepit hackles rising. Be it said, mine is one of those households very, very glad of said subsidy. But is it really, in Sally Keeble's eyes, the moral last ditch of a Labour government? Is it even worthy of consideration as an 'untouchable' in this, the moment of enforced cutbacks in government spending? At any rate, it's got the New Labour ultras rolling their eyes in O tempora fashion. I don't know if I want to sit beside those guys 'n' gals anyhow, and I'm not sure how many of them are really concerned about whether (as some surely hope) the green leather benches can be remuneratively traded for the boardroom. But since it's not my livelihood at stake here, I freely declare from my swivel chair, 'Yep, you've got to get rid of Brown.'
Posted by Richard T Kelly at 16:17:00 No comments: Links to this post

Sting: is from Wallsend

Like a lot of us (this blogger included), and, specifically, like many an entertainer of working-class origin (such as the late John Martyn), the former Gordon Sumner (known to the world as Sting) tends to deploy his native regional accent according to where he's standing and to whom he's talking. Fair play, but - he is from 'Wallsend on Tyne', as he calls it, and his thoughts on that locality and the wider North East are explored at very interesting length in his 2004 memoir Broken Music (which, for some odd reason, is available to browse online as a PDF here.) True, back in the early 1980s when he was en route to becoming a huge superstar he made some very disparaging remarks about Newcastle, making clear that the place had no claim on him and he had no time for misplaced industrial nostalgia. But similar frustrations have been voiced by more than a few artists of Geordie extraction, few of them famous enough to be on the cover of the Rolling Stone. And if you want to be a huge superstar you will probably have to take your leave of Wallsend on Tyne, at least for a fair old while.
Doing the PR rounds for his fine new record, which seems possessed by certain Northumbrian spirits, Sting has been sounding very Geordie, and that's clearly appropriate. Accordingly, people have been asking him what he reckons to the fortunes of the Toon. And in the course of consummately putting the boot into Simon Cowell's ghastly racket, he's paid homage to the pubs and clubs from whence he came as a lost hotbed of popular music. The fact that he now lives in a castle and has chateaux to spare in no way diminishes his points or his sincerity. And yet one sarky reviewer of aforementioned new record referred to Sting in passing as 'the world's most pompous man' - clearly he's yet to see Simon Cowell on ITV1. I've tuned in and out of Sting's stuff down the decades, and winced one or twice over certain ways in which he's chosen to express himself, but, really, what an embarrassment of musical talent this man has in his head and his fingertips, and what a commitment to a personal vision of what 'popular' music can be, whether played on a lute or a horn or in 9/8 time, whether inspired by the streets of Belfast or Buenos Aires - or just because of some girl. Back in 1983 'Every Breath You Take' was a tune I felt bored by after one hearing; now I don't think it's possible to write a more enduring, ingeniously 'simple' pop/rock ballad. Sting, of course, has moved on, though clearly he'll still play the oldies now and then. And were there to be a Sting Night on X Factor, per last night's pipsqueak protest-cum-invitation from La Cowell, I'm sure that song would be the one the karaoke kids fought among themselves for - rather than, say, 'I Hung My Head' or 'Synchronicity II.' However, I doubt Mr Sting will be blessing any such endeavour. I assume he just wanted to make a point. Point (annihilatingly) made.
Posted by Richard T Kelly at 14:53:00 No comments: Links to this post