A 'Knives' Q&A in The Big Issue North 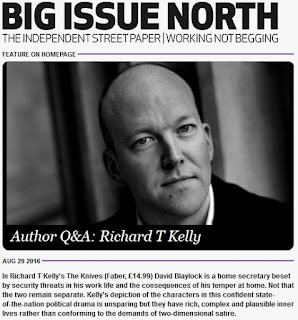 I really enjoyed doing a Q&A with Kevin Gopal of The Big Issue North, which went into their recent print edition and can be viewed in full online. Below are a couple of snippets related to current affairs...

A non-Etonian home secretary has just become prime minister, but could a working class one from the North East?
Absolutely. If you just take New Labour’s run of home secretaries – David Blunkett, John Reid and Alan Johnson all came from working class backgrounds, and each might have been prime minister at one time. The Tories tend to more middle or upper-middle class origins, sure – but not David Davis or Patrick McLoughlin or Sajid Javid or Michael Gove, to speak only of the cabinet in recent years. Greg Clark, the new business secretary, is from Middlesbrough and I believe his dad worked as a milkman.

How has the country changed since you wrote Crusaders?
Crusaders was published in 2008 while New Labour was running out of road, as governments do. You could see the Tories had made themselves presentable again, so we were looking at another turn of the wheel, another Conservative era. The coalition and Cameron’s abortive second term were unstable, to say the least, but regrettably Labour in that time has contrived to abandon the business of real politics. So the many troubles we have afoot and headed our way will be for the Tories to contend with, I’d say.
Posted by Richard T Kelly at 03:51:00 No comments: Links to this post

*The* Home Secretary on The Knives: 'Fantastic'

Certain comments on certain things are delivered from positions of expertise. And some things require no comment whatsoever. Here I'll just say that I was very gratified to get this tweet while on holiday in San Sebastian last week.

My column on 'Politicians in Fiction' for BBC Radio 4 Open Book, recorded at Edinburgh Book Festival

BBC Radio 4's Open Book, presented by Mariella Frostrup, is a terrific platform for literary discussion, and I was thrilled to make my first appearance on the show in 2015, discussing the centenary of Kafka's Metamorphosis with playwright Mark Ravenhill. Coinciding with the publication of The Knives, producers Nicola Holloway and Kirsten Locke offered me a treasured opportunity to write and deliver the show's regular column feature from a given writer on a personal theme; and as both Open Book and myself were at the Edinburgh Book Festival on Wednesday August 17, I got the chance to say my piece in front of a live audience.

You can listen to the full Open Book broadcast - my column (starting 00:11:30) amid a discussion chaired by Mariella, the panel being myself, Ben Markovits, Raja Alem and Nick Barley - here.

And for the boon, here is my text:

I’ve just written a novel about a politician. In idle moments I wonder if I’d have been better off making my story about a serial killer of kittens; or some job that’s equally popular with the general public – a traffic warden, say, or a bailiff.

This thought first came to me when I was describing the plot of my novel, The Knives, to a friend. As I told her that it’s about a fictional Home Secretary trying to manage the multiple daily crises that come with his job – I could see she looked troubled, somehow. And when I was done, her first question was simply: ‘Are we supposed to like him?’

Our sympathies are important to us, in our reading as in our lives. And right now, as a public, we seem to hold our elected politicians in very low esteem – lower than a snake’s belly. Routinely, they are characterised as careerists, connivers, charlatans, backstabbers – fingers in the till, noses in the trough.

This is nothing new, though. There’s never been a time when politicians were very much loved or trusted – and literature provides all the evidence we need. Take PG Wodehouse’s novel Cocktail Time in which Lord Ickenham tries to dissuade an old friend from seeking election as an MP: ‘Have you ever been in the House of Commons’, he asks, ‘and taken a good square look at the inmates? As weird a gaggle of freaks and sub-humans as was ever collected in one spot.’

If fictional politicians are not portrayed as freaks, then they’re usually villains. Which is fine in a novel such as Michael Dobbs’ House of Cards, where Francis Urquhart is clearly a murdering psychopath and we’re supposed to ‘love to hate him’; or Robert Harris's Roman trilogy about Cicero and Julius Caesar, which is brutally honest about power and corruption but, conveniently, takes place two thousand years ago.

I’m not saying that people – including writers – shouldn’t be disapproving – even cynical – about politicians. In a democracy, that’s probably healthy. And it’s the nature of democracy that you will always find a largish group of people sweating with hatred over the fact they are governed by a party they themselves did not vote for.

It is, however, a problem for writers if they lose the empathetic gift they’re supposed to possess – the gift for seeing themselves in others, and others in themselves.

Norman Mailer, politically a man of the left, spent seven years writing a novel called Harlot’s Ghost about the C.I.A. – those bogeymen and women of the liberal imagination. When asked why on earth he bothered with such people, Mailer replied, 'They really are pretty awful. But on the other hand, who isn't?’

In The Human Stain by Philip Roth – set in 1998 when President Clinton was facing impeachment for sexual indiscretions in the Oval Office – Roth’s narrator Nathan Zuckerman becomes so wearied by the widespread damnation of Clinton’s failings that he imagines a banner wrapped round the White House, labelled to remind the public: A HUMAN BEING LIVES HERE.

If that sounds a little extreme, nonetheless I think it contains a truth. In researching The Knives I met and talked to a lot of politicians – and, to put it mildly, I found them recognisably human. They do highly demanding jobs in which, sometimes, in spite of best efforts, things go wrong – just like in your job and mine. To suppose they are indifferent to the consequences of their actions or inactions is to deny their humanity – and a part of your own.

We look to fiction for a true reflection of what we’re like – what Elvis Costello calls ‘the deep, dark truthful mirror.’ As writers and readers, I think we should try to see at least the shadow of ourselves in our politicians.
Posted by Richard T Kelly at 14:22:00 No comments: Links to this post