Iran: The People vs The Monkey & His Organ-Grinders 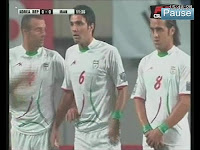 The Iranian revolution of 1979 was, I daresay, the first time a major event in global current affairs marked itself on my then-juvenile mind. No surprise, really. The street-level tumult of a revolution always looks powerful on TV (whatever Gil Scott-Heron was thinking when he wrote his rap about such happenings never being televised.) And above the fray of the streets, of course, was the indelibly black-browed, baleful gaze of the Ayatollah Khomeini. These things stick in a 9-year-old’s mind.
I was dimly conscious, too, that the Rise of the Mullahs was grim news for the USA, and later I was made aware that Reagan’s victory over Carter in the following year’s US presidential poll was a lot to do with how America wished to be seen in relation to the newly-minted Islamic Republic of Iran.
Ten years on… 1989, and Khomeini issues his death warrant on Salman Rushdie. A noticeable number of sniffy British authors, Conservative politicians and newspaper pundits say that, basically, we shouldn’t meddle in Iran’s business, that Rushdie had caused great offence to Islam & its faithful, and that, anyway, Rushdie was an arrogant dark-skinned troublemaker and a Labour voter to boot…
By 1999 I had come to the view that globalisation (read: Americanisation) of the planet was a regrettable trend that ought to be resisted wherever possible. Within a couple more years, though, I had to admit an important qualifier – namely, that while natural diversity and difference should always be respected there were certain corners of the globe where, clearly, a little bit of Americanisation would be exactly what the doctor ordered, for the betterment of the state in question and its people who clamoured for change. To speak of only one example, the increasingly frightful Islamic Republic of Iran.
Like a lot of slovenly westerners, perhaps foolishly or gullibly, I’ve been very taken in recent years with photo-journalism of the Iranian street depicting young men and (more importantly) women, smoking cigarettes, wearing earrings or make-up, and showing off haircuts clearly modelled on those of Western pop stars and footballers. Yes, true, I love to imagine all these dynamic youths reading Lolita in Tehran, and voting for an outward-looking, pluralist democracy that favours freedom of speech and the rule of law. I like to think that's what Iran's brave national football XI had in mind the other night when sporting those green armbands (pictured).
At the same time I’ve been conscious that Iran is one of those places proving the anarchist maxim that if voting changed anything then it would be made illegal. And one doesn’t want to be swayed on serious matters by the slightest and most ephemeral fashion. Moreover, being on America's side in the matter is, in effect, to say that the notion of the mullahs acquiring a nuclear weapons capability makes one sick (for all that it may be impossible to stop now.) This is a double standard, of course, but one that's fine by me, I confess.
It feels necessary to support the fight against the smelly little orthodoxies, of which one could find no more pungent exemplar than the diminutive Mahmoud Ahmadinejad. But I suppose one should look past the monkey to the organ grinder, Ayatollah Ali Khamenei. Today this rat-bag calmly states that Iran’s enemies ‘are targeting the Islamic establishment’s legitimacy by questioning the election and its authenticity before and after’ the vote. But there was no realistic 'before' to the vote, man! Its result was preordained.
Yes, of course, the Monkey may indeed have won a useful majority. The other day I heard an expatriate Iranian woman on the radio saying wearily that a lot of these young protestors had voted for the first time, and had yet to appreciate that one’s preferred candidate sometimes loses. And I know Ahmadinejad is the champion of the urban and rural poor. But a landslide? Get away, man.
Khamenei is being such a loathesome idiot that one hardly wants to dwell on the obvious problems for President Obama in calibrating his response: America's perennial double standards in respect of Egypt or Saudi Arabia, the poisoned option of regime change (Iran has to be a popular overthrow or nothing), and the unproven qualities of Mirhossein Mousavi, who seems – to be fair – a fairly mediocre and dubious figure to be the focus of such vehement feeling.
Still, one hopes the Iranian people won’t calm down or do as they're told, but keep on facing down their sinister discredited rulers, and so make it finally impossible for Western governments to do anything but take their side.
Posted by Richard T Kelly at 04:45:00 No comments: Links to this post