Red Riding: Do you take it black?

The other week I was talking to a Great British Filmmaker who, inter alia, was madly enthused about the previous evening’s transmission of 1980, the second of three instalments in Channel 4’s production of David Peace’s Red Riding novels (this one directed by the esteemed James Marsh, he of Man On Wire and others.) So, yes, Great Filmmaker was blown away, thought it was all wonderful, etc. I don’t think he’d had as much pleasure in front of a television set since they cancelled Twin Peaks.
At the same time he was a tad puzzled and frustrated as to why such ostensibly ‘dark’ dramatic material could be made in such a ‘bold’ stylistic manner for television, without any apparent qualms, whereas any commensurate attempts to be ‘dark’ and ‘bold’ with a feature film project are struggling more than ever to get off the ground right now. Great Filmmaker was speaking from rueful recent experience: the demands and expectations of ‘genre’ have become the bane of his life. (Moreover I’m aware of what a hard fight it was for Revolution Films and Channel 4 to get Red Riding into production and onto screens, for all the talent that was assembled in front of the camera as well as behind it.)
But as one film executive recently put it to me, the only movies getting made right now are ones that have ‘a very clear idea of their target audience.’ On that level it will be interesting to see how the feature version of David’s The Damned United fares upon its UK release next Friday. Certainly it’s being offered to the public as a far friendlier, more approachable work than Red Riding, which was unabashed about its aura of suffocating bleakness and virulent Yorkshire-born evil.
Posted by Richard T Kelly at 17:38:00 No comments: Links to this post 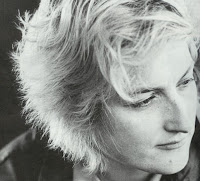 You reach a certain age in life where – well, for one thing, where it becomes very natural for you to begin a sentence as dismally as ‘You reach a certain age in life…’
Where was I? Ah yes. No, but really. Over time you may well get to the point where you start to see your university contemporaries popping up all over the place in public life. I went to a university that was pretty big on drama and media, indeed I expended most of my own ostensible B.Sc study-time staging plays and writing/editing on the student paper. Consequently I’m always pleased to see my ex-collegiate editors appear on the telly, whether Peter Hyman on Newsnight, or the radiant Susannah Reid on BBC Breakfast, in-between her maternities. Today I noticed another student paper associate, Tom Chesshyre, in the Times, and it seems he has a newish book out.
And on the drama side of things – I’ve never even seen Little Britain and yet still I find it hard to avoid David Walliams/Williams on TV. Most eminent of the drama bunch, I suppose, was the late playwright Sarah Kane. Last weekend I was in company with someone significantly older than either Sarah or myself, who has already made a close study of the Kane oeuvre as part of an English/Drama qualification. Naturally, talk turned to the first, celebrated/damned production of her play Blasted at the Royal Court in 1995. I was then asked if I could say what Sarah was ‘like’? Well, I knew her only slightly, the proof of which is probably implicit in the fact that I found her always very friendly and engaging and full of drive. In other words, she didn’t strike me as a depressive – but then, I’ve subsequently learned that no-one ever does until you know them extremely well; and even then, ‘the ruin is within’, as the poet said. But Sarah certainly struck me as a full-blown artist, perhaps the first contemporary I’d met close-up who’d had that effect, mainly because on the one occasion we shared a rehearsal space she so clearly knew exactly what effect she wanted, and she wasn’t afraid to shout about it.
The last time I caught sight of her was in 1998 at the Edinburgh Festival where she was presenting her play Crave and I happened to be curating a season of films by Alan Clarke, most of which, I was delighted to see, Sarah came along to. I should have guessed there would be an affinity for her in the uncompromising nature of Clarke. After a screening of Made In Britain that had knocked the audience dead, or so I thought, Sarah came up afterward to give me an affable bollocking about the poor sound quality. Very finical, you see. Six months later she was gone. But I see that only the latest of her revivals, 4.48 Psychosis, is blessed with and animated by the presence of Isabelle Huppert. A powerful testament, and there will be more, for sure.
Posted by Richard T Kelly at 17:21:00 No comments: Links to this post

So much for that effing Crunch-Cup-Tie. Hard to see what the NUFC players or flailing interim management thought they were doing to positively take away three points from a full-blown six-pointer. So, one it was, then – inadequate, like everything about the Toon this season barring the support; and so three weeks tomorrow the team go to Stoke for the next bloody crunch-cup-tie/six-pointer, by which time I can’t believe we’ll be sitting anywhere other than second-bottom of the league. The side that runs out against Arsenal at SJP tomorrow will be picked from a near-as-damn-it full-strength squad. And still, there’s no hope. True Faith says it all: ‘So far this season this squad have failed to beat any of the following teams (opportunities in brackets): Hull (4 times), West Ham (twice), Blackburn (twice), Everton (twice), Man City (twice), mackems (twice) and Wigan (twice). The others are still to be determined. Is this really the kind of team that deserves to stay up? If this was the mackems or the smoggies we’d be p*ssing ourselves laughing.’
Posted by Richard T Kelly at 16:59:00 No comments: Links to this post

Citizen Campbell at the Staggers

On a day like today - when I'm feeling rather like the creaking old horse who would be most kindly served by a sharp bolt to the head - it's surely a chance at inspiration to look and see what sort of a fist Alastair Campbell has made of editing the New Statesman for a week. (After all, I went for a couple of runs this week, my first such in maybe a year, and my calves, thighs and soles are still riven with pain; whereas Mr Campbell, famously, could jog for England, and still seems to get all his writing done, unlike me.)
Campbell's NS editorial is a gee-up speech to get Labour aroused and proactive for the next election. He comes out jabbing with a crack at the Opposition ('The Tories are not that far ahead. More importantly, they are not that good') and for sure that sounds like the forceful, entitled voice of experience, given Campbell's former dynamic position at the heart of government - though, somehow, still, I can't stop thinking that said position was not one to which I or anybody else in the country elected him.
In his view, "the Tories, Lib Dems and nationalist parties are not being subjected to sustained policy attack" and that of course would be his stock-in-trade were he back at the helm, but I'm not sure even Campbell could shoulder-charge the scrutiny away from government all that effectively when nearly every day has the potential to be a Bad News Day. (I mean, I was on a plane yesterday and so read the FT cover to cover... Jesus Christ, pass the revolver.)
AC's big planks, it seems to me:
1. "There has to be an excitement to the pre-manifesto process."
(Seconded, comrade. Let's have a carnival of ideas.)
2. "This government has saved [the NHS], as promised. Yet health – and education – have virtually disappeared from the political battleground..."
(Not true. For better or worse Cameron has proposed that the Tories contest this very Labour-like ground, so we've heard plenty already and we'll hear yet more.)
"[B]oth [health and education services] would be at risk if the Tories were returned. Young voters in particular need reminding what Britain under the Tories was like."
(I don't think that's going to wash. You can't fight Margaret Thatcher or John Major in 2010, only what's in front of you.)
3. This is what Campbell thinks Labour should important from Obama, and not just a lot of verbless sentences, but: "A clear, robust strategy. Teamwork. Organisation. Values. Hard work. Rebuttal. Attack operating at several levels. Message discipline. Creativity. Enthusing and empowering new supporters. And never even contemplating defeat."
All well and good and motivational. Maybe a bit thin for a weary Party trying for a fourth win in a row, whatever faith Campbell has in the cleansing, past-eradicating qualities of a strong message. But then I'm sure he's keeping his best stuff back for private consultations with Labour's Top Team. I mean, probably.
Posted by Richard T Kelly at 04:12:00 No comments: Links to this post