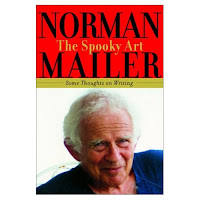 Today, owing to an unfortunate necessity, I had to forsake my desk at home and go work in the local library, only 5 minutes' walk away, but a drag nonetheless. Waiting for some dogged daily newspaper scanner to give up one of the few writing tables with a plug-point adjacent, I wandered around the stacks awhile and was pleased to happen on a copy of Mailer's collection of thoughts on the writing process, The Spooky Art (2003). Browsing through it at least made the waste of time feel a good deal less vexing, even medicinal.
For a while I read from the index back and found Mailer very good on the affinities and disparities of the Russian masters: basically, that Dostoyevsky went down to depths that Tolstoy couldn't penetrate, but lacked Tolstoy’s panoptic sense of perspective and so tended toward hysteria; consequently from Dostoyevsky we come away with memorable individuals, and from Tolstoy entire societies.
Elsewhere: he's generally thoughtful about bad reviews, albeit occasionally desirous of knocking some picky little toerag's roof in.
He's bracingly self-critical about most of the books, as well as his much-advertised personal failings.
He sounds friendly enough about old Gore Vidal, to whom he is undoubtedly superior IMHO.
You get that sense that he wasn't ever as mad about The Executioner's Song as the book's ardent fans, for all that it's so alive to something fundamental in the big centre of American life, just because it was less his invention.
He makes a useful critique of Jonathan Franzen’s The Corrections as a self-consciously big and well-upholstered novel that doesn't feel large or truly lived.
He expresses a touching love for the novel on the ground that it is 'the form best suited for developing our moral sensitivity - which is to say our depth of understanding rather than our rush to judgment.'
I nodded grimly in reading another version of his view that writers must discipline themselves 'to do a good day's work on a bad day.'
More grim nods when he volunteered that 'working on a book where the plot is already fully developed is like spending the rest of your life filling holes in rotten teeth when you have no skill as a dentist.'
Then there is the rub: ‘I remember saying in 1958, “I am imprisoned with a perception that will settle for nothing less than making a revolution in the consciousness of our time.” And I certainly failed, didn't I? At the time, I thought I had books in me that no one else did, and so soon as I was able to write them, society would be altered. Kind of grandiose…’
Still, searching around some reviews tonight I was satisfied that a fair few writers are properly sympathetic to Mailer's readiness to dare and risk failure.
Thomas E. Kennedy: ‘Perhaps the greatest works are inevitably flawed for they reach toward the unreachable in comparison to small works satisfied with small accomplishment.’
Richard Poirier: ‘At his best [Mailer] seeks contamination. He does so by adopting the roles, the styles, the sounds that will give him a measure of what it’s like to be alive in this country.’
Wilfrid Sheed: ‘Mailer follows the Chestertonian principle of exploring the psychosis proper to the group, the identifying madness, and letting it enter him, like an exorcist opening himself to the devil.’
Quite. Like the demon of his last wondrous production The Castle in the Forest, Mailer gave himself the right to inhabit men's minds. Spooky indeed.
Posted by Richard T Kelly at 15:19:00 No comments: Links to this post

NUFC: Take this ticket, go to hell and stick it 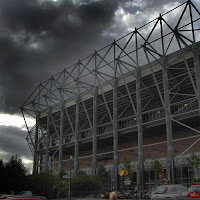 The excellent nufc.com reports that this Saturday there will be a protest march comprised both of Toon fans intended to boycott the Hull game and those intending to enter St James's Park but only after the 3pm kickoff. The plan is to meet opposite Tilleys Bar on Westgate Road for a 3pm march, to finish up outside of Shearer's Bar. There is also due to be a pure protest gathering outside Old Milburn Reception from 2pm, and one imagines that will be one long howl. Desperate times, but entirely justifiable actions.
Posted by Richard T Kelly at 14:58:00 No comments: Links to this post

Many congratulations to the man whom I hope I can get away with calling 'my fellow Faber novelist', Sebastian Barry, on his being shortlisted for the 2008 Man Booker Prize for his latest novel The Secret Scripture. From this point onward I don't suppose anyone can guess the outcome of the judging, it will all come down to five people in a room something like a month from now; but Sebastian Barry has been to this dance before in 2005 with A Long, Long Way, so one trusts he will be braced at least for the suspense that lies ahead, and able just for the moment to savour another richly-deserved recognition of his gifts.
Posted by Richard T Kelly at 11:57:00 No comments: Links to this post 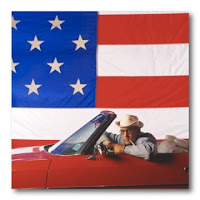 At some point soon I hope to write properly and at length about Alex Gibney's documentary Gonzo: The Life and Work of Dr. Hunter S. Thompson, which I saw this evening. For the moment I would only say that it sure stirred up some ghosts for me. The final credits run to the tune of Warren Zevon's 'Lawyers, Guns and Money'. The moment in my sluggish adolescence when I first made the connection between what these two men were up to as artists, and liked to in common and indeed together - sometime around the publication of Thompson's The Curse of Lono and the release of Zevon's Sentimental Hygiene - was a fairly vital one for me. Zevon, too, has been gone for some years now. And men like Thompson and Zevon, they really shouldn't die. And on another level, they clearly should. Not by fading away neither.
Posted by Richard T Kelly at 15:55:00 No comments: Links to this post 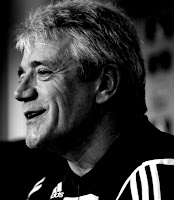 ... in spite of my previous and heartfelt appeal, which, you know, I'm not sure reached him - did he happen to mention it last time you spoke?
Anyhow, today Milner told the Mirror - while no doubt breathing out a great blasting sigh of relief - "What is going on now at Newcastle showed what was going on behind the scenes at the club."
In other news: NUFC itself continues to try to deny it is an effing shambles by sending out pompous pseudo-tough-talking press releases, the latest purporting to be a point-by-point rebuttal of Kevin Keegan's expressed complaints, but failing utterly and risibly on the basis of previous on-the-record comments made by Ashley and Wise.
Posted by Richard T Kelly at 15:28:00 No comments: Links to this post