Tom Watson: The Leader in the Clubhouse, and in much else besides...

Fair play, Brendan Gallagher of the Telegraph got in first this week with the headline/subhead that you'll see in all coverage of today's first round of the Open golf at Turnberry. 'Tom Watson Rolls Back the Years' was Gallagher's heading, and this on the strength of nothing more momentous than Watson's Monday practice round:
"Even at the age of 59, Watson insists he could be competitive this week if granted four days of wind. It is the great leveller, shots have to be conjured from the imagination, muscles matter less than maturity. Experience can really count... I wouldn't discount, for one minute, the possibility of Watson shooting a 68 some time this week."
Well, the wind hasn't stirred today and Watson just shot 65 for an early first round lead; just as he did in the 2003 US Open, when he was very much playing for his longtime caddie Bruce Edwards, stricken by Lou Gehrig's Disease. Great stuff from one of this particular game's few gentleman-champions; sadly it's too much to expect Watson to hold on and win a major these days, even at Turnberry, where he famously bested Jack Nicklaus in 1977. Nicklaus seemed like a wizened veteran to me when he won the last major of his career, the Masters, in 1986. (He was probably in his mid-40s...)
Watson has had good days and scores at the Open in the last 25 years, shadows of the five claret jugs he actually won. I think he went into the weekend as the leader back in 1994. But even by then he had gone from the Guy who could confidently charge a putt past the cup and knock it back in to the Guy who seemed to be in agonies of neurotic indecision every time he bent down over a 4-footer. The shame was that Watson's short game is what set him apart and made him a great champion back in the 1970s and 1980s. A lot of guys could hit it longer, though few hit it straighter than Watson. But where he excelled was getting up and down from tight spots, which is always a special inspiration to young golfers. (Severiano Ballesteros, the man who invented the car-park escape-shot, was a similar-but-different lodestar.)
I became a fan of Watson's watching him win the Muirfield Open of 1980 with remarkable grace. There were a lot of low rounds that year, but Watson was the Guy who put four of them together. Two years later he sneaked a win at Troon, but his real triumph that season was the US Open at Pebble Beach. I can still recall the thrill of watching live his great coup de grace (pictured): a pitch into the hole on 17th, from impossibly dense and verdant Californian greenside rough - birdie snatched from probable bogey, Nicklaus bested again.
Pro golf doesn't produce too many charmers or 'characters', which is why certain golfers can get reputations as loveable/irascible rogues solely on the strength of wearing stupid outfits. Watson has never seemed like a huge jokester, but he's always managed to sound reflective and wry about his sport, and has generally played with an engaging and deeply American smile on his face, sufficient to get certain commentators reaching for their Mark Twain.
That said, I also recall him looking as cheerful as a man who'd been gored by a bull as he lined up a par putt on 17 at the St Andrew's Open of 1984. He was chasing a record sixth title, a third win in a row, and had led for most of the tournament. But Ballesteros had just made birdie at 18 for the lead and was pumping his fist in the air like a matador: a 'classic' Open moment repeated constantly ever after, and I still feel sick when I see it. Watson missed his putt, lost his title and never won another major.
This weekend isn't going to change that, but Watson will presumably be around for the final day, will receive further much-deserved ovations, and give younger fans cause to note his name for reasons other than endless re-runs of that 1977 'Duel in the Sun'. That said, Watson's own account of same - given to the Telegraph this week - reaffirms the special drama of that particular contest, as well as Watson's affable thoughtfulness on the game he loves - 'the spirituality of golf', indeed...
Posted by Richard T Kelly at 04:48:00 No comments: Links to this post

"The eerie atmosphere of misty Venice creeps across the courtyard of Somerset House as Nicolas Roeg's 1973 masterpiece casts its sinister spell..." So goes the siren's call for the Film4 Summer Screen open-air showing of Don't Look Now scheduled for 9.15pm Wednesday August 5. Beforehand (and indoors, I believe) at 6.30pm I'll be in conversation with Nic, under the aegis of BAFTA, on the subject of Don't Look Now and, I imagine, other things, some of those including films. The maestro will also take questions from the audience. All the needful information and advance ticketing stuff can be accessed here.
There's also a really good page over at BAFTA, devoted to their Roeg tribute evening of March 27 earlier this year. There you can watch and hear all the speakers from that evening, whether they were live or on tape, including Danny Boyle, Kevin Macdonald, Stephen Frears, James Marsh, Christopher Nolan, Terry Gilliam, Guillermo del Toro, Seamus McGarvey, Paul Greengrass, Mike Figgis, Sam Taylor-Wood... and, er, me, the one who hasn't directed a masterpiece box-office smash... But I was honoured to be in that line-up, and also in the team photo taken at the end, #14 in the Photo Gallery, wherein James Fox is at my side - a big moment for a Performance fan such as I.
Posted by Richard T Kelly at 03:07:00 2 comments: Links to this post 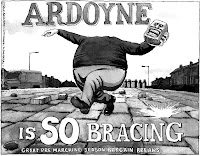 The last time I stood and watched a parade go by on the anniversary of the Battle of the Boyne - in fact, I should say the only time - was in 2000, and a dispiriting occasion it was too, other than for the fiercely determined and fairly skilful efforts of the many adolescent baton twirlers-and-tossers. After the first five minutes of (admittedly impressive) Lambeg drum din, any Twelfth of July march becomes as tedious as that martial pounding over time: block after block of dapper and dogged walkers, old men in bowler hats quite often proclaiming their temperance, younger men and boys squeezed into smart gear, disciplined for sure, but looking like they could murder a pint... And on the pavements, the real gala event, awash with booze, already waiting for the night to fall. A summer festival of sorts, but not the sort of party you'd want to stumble upon.
Even after all the ironies of the 'Peace Process' it was odd to hear Sinn Fein's Gerry Kelly speak scowlingly of the 'Real IRA''s supposed orchestration of protests against yesterday's marches. If Sinn Fein and their supporters have come to see 'The Twelfth' as an irrelevance that should be allowed by the 'Nationalist Community' to pass off without so much as a rock tossed in anger, then far we have travelled indeed...
Posted by Richard T Kelly at 13:32:00 No comments: Links to this post