What I saw with Doctor Forrest in Barcelona...

The special treat of seeing one of my books translated into a foreign language always gives me a unique commingled feeling of sophistication and idiocy: it is, after all, quite a thing to get to this age and see your name on the cover of a book you can’t read.

My chief emotion in this case, though, is just huge gratitude that my gothic novel The Possessions of Doctor Forrest has been rendered into Spanish most elegantly (as Las posesiones del doctor Forrest) by Alba Editorial of Barcelona, as part of its Novela Negra imprint. The cover alone, with a shiny spot-finish on the sinuous serpent, is undoubtedly a thing of evil beauty. And this publication has renewed an association with Alba begun in 2001 when they also put out in Spanish my book on Dogme 95 (as El título de este libro es Dogma 95.)

I owe a huge thanks to Idoia Moll and the house of Alba for hosting me so generously in Barcelona last month to tie in with publication. I was interviewed by a number of journalists at Alba’s wonderful offices, where I admired the great range of their publishing, embracing both the best of the contemporary plus a great array of the classics; I toured the famous Gothic Quarter of Barcelona, which is everything that I heard it would be and more; and I signed books at the renowned Negra y Criminal bookstore. A great swathe of wall-space at Negra Y Criminal is generously decorated to record visits paid by some of the great names of crime and mystery fiction. (I was honoured, then, to take my turn at the time-honoured custom of posing in one of the shop’s branded tee-shirts.)

The longest and most detailed of the interviews I did was probably that with Begoña Corzo of La Vanguardia, for which we were accompanied by the photographer Clara Gabrielli. I really enjoyed our wide-ranging conversation, and am quite happy to have been described as a fellow of ‘muchas caras’, likewise to read that ‘como el doctor Jekyll, este inglés grandote y afable se ve poseído por personalidades intermitentes.’

The special pleasure for me of this interview was that we walked together to the headquarters of the Royal Academy of Medicine of Catalonia, originally the seat of the Reial Collegi de Cirurgìa de Barcelona (Royal College of Surgeons of Barcelona). We then conducted the bulk of our discussions in the rich, red and resplendent surroundings of its finely preserved 18th-century anatomical theatre, named the Sala Gimbernat after the great surgeon and anatomist Antoni de Gimbernat (1734–1790). The minute I walked through its doors, you can imagine, I was in a kind of heaven - and very happy to pose for Clara Gabrielli’s camera with my brow tilted and hands strategically placed on the marble dissecting table (as above.)

I must say all of the journalists I met in Barcelona was terrifically well-informed and very courteous and it was a pleasure to talk to them: Josep Lambies from Time Out Barcelona, whose write-up isn’t online; Albert Cano of La Opinion a Coruna, who I’m very pleased to say reported me as ‘culto y con capacidad para reírse de sí mismo’; Rosa Mora of El Pais, with whom I had a useful discussion about what Doctor Forrest has to say on public and private healthcare; and a woman from Regio 7 whose name now eludes me but who was most kind in the piece she wrote.

So I consider myself very fortunate - a writer's life is good indeed when one can be treated so well and with such warmth on account of having written a book about the guileful means by which the Deceiver exploits one man’s damnation so as multiply the sum of misery in the world... May I be so lucky again.
Posted by Richard T Kelly at 06:18:00 No comments: Links to this post 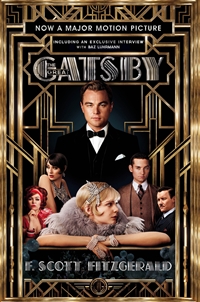 It’s rare indeed that I find myself quite so far ahead of the pop-cultural curve... but for anyone seeking insight into Baz Luhrmann’s new film version of The Great Gatsby in advance of its Cannes premiere, I can direct them to a long interview I did with Mr Luhrmann for the newly published Picador film tie-in edition of Fitzgerald’s novel.

The pilgrim will find much of interest in Luhrman's reflections, I feel – about the influence on the director of Francis Coppola and Joseph Conrad, also of a journey he took on the Trans-Siberian Railway; on Luhrmann’s compendious research into Fitzgerald’s world and that of the novel; on the bold structural choices he and Craig Pearce made for their screenplay; on his musical collaborator Jay-Z’s opinion of Jay Gatsby’s character; of what Gatsby has to say of its time and to ours; and more.

Our conversation was a privilege for me in more ways than one: on top of his creative accomplishments Mr Luhrmann is a hugely eloquent and engaging speaker, witty and charming, free of airs and, I should say, a gentleman, too. His movie is very keenly awaited, of course. But I’m very struck by what I’ve heard and seen, and I’m certainly wishing this Gatsby all the very best, old sport.

This is how our conversation wound round to its conclusion:

RTK: In their famous interview Alfred Hitchcock and Francois Truffaut agreed there was a problem about turning great books into films because the books were already masterpieces, made out of words, which pictures couldn’t emulate. Clearly, having made 'Romeo + Juliet' you’re happy to work with classic texts. But do you feel there is something about 'Gatsby' that you have to try to be ‘faithful’ to, to satisfy the book’s admirers? Or are you content to say to audiences, ‘This is the way I see it...’

Baz Luhrmann: Of course I hear that perspective. But there have been some pretty good cinematic goes made of some great books... There may be people out there with large pieces of wood counting down the days until the movie is out so they can come and hit me... ‘How dare you?’ And I understand that, and I don’t take it lightly. Nonetheless – I love the book too. And I always think great literature is there to be interpreted in many different ways, in different times and by different people – for example, I look forward to the next person who does a 'Romeo and Juliet' movie different to mine. To me, what defines greatness in literature, culture, of any kind, is that it’s able to move through time and geography, it can play in any country and continues to play in any era. And that’s true of 'The Great Gatsby'...


Another thing I must say about this Picador edition is that it’s quite a thrill for me to have some of my words – be they very simple ones – bound up between covers with those of F. Scott Fitzgerald’s and a novel that I, like millions of readers, think of as one of the most brilliantly achieved in English.

It has a special little nostalgia for me because I studied Gatsby for the A-Level English Lit paper I sat back in the summer of 1989. I have before me, in fact, the A-format Penguin paperback that was my text at the time: unusually zealously annotated with pencil-scribbles, a source of amusement to me today, for as long as no-one else gets to see them. I’m reminded, for one thing, that the 18-year-old Me was strongly persuaded of Wilde’s maxim that only shallow people fail to judge by appearances. I don’t think I would want such a judgement levied today – or not on myself, at any rate.

I would, though, stand by the pencilled ‘Genet!’ that I put beside Nick Carraway’s early description of Tom Buchanan’s ‘cruel body’, an interesting way for one guy to look at and describe another guy’s figure. Gatsby is often thought of, or remembered, as a romantic book, as a love story. And yet the ostensible love object, Daisy, is really not such a nice girl – unworthy of all the fuss, you might say. And so the ‘romance’, finally, lies more in Jay Gatsby’s outsized illusions about her and the world (for which he constructs his dazzling facade of a life, and then throws that life away.)

Or does it? Is the biggest romantic crush in the book actually the one Nick Carraway has on Gatsby, in whom he finds ‘something gorgeous’ (above and beyond his pink suit), even after all the shows of ostensible disapproval...? This theme of latency has been explored in more recent criticism of the novel, I believe. I don’t say I go along with it. I only note it.