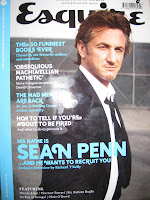 This month's Esquire is, in the journalistic sense, my first-ever cover-story, which feels like rather a special moment, to be frank. No-one who knows me has expressed the slightest surprise that the subject of said cover-story happens to be Sean Justin Penn, but then they know me too well. For the many readers who have never heard of me but are intrigued by SJP, I hope the piece proves useful, and - who knows? - might even lead them toward a spot of further reading, specifically Sean Penn: His Life and Times.
One snippet of Sean on Harvey: ‘It did strike me that there could never be a better actor to play Harvey Milk than Harvey Milk. That’s rarely the case: usually you figure you can create a more charismatic character, or else they’ll just cast someone better-looking than the real guy… But Harvey’s particular dear quality was very unusual.’
Need I add that there's plenty more great stuff within these covers this month, including a very useful piece on the '50 Funniest Books Ever Written'? It's a grand selection even though it doesn't have room for Flashman or The Rules of Attraction, and favours Summer Lightning over The Code of the Woosters for some odd reason best known to the literary agent Peter Straus.
The movie reviewed in my regular column is the wonderful Curious Case of Benjamin Button, for which my feelings grow yet more dear even as day by day the picture, most unhappily, is marked yet more woundingly with the stigma of Expected Loser at every Awards Ceremony still to be held in this long-drawn-out Awards Season...
Posted by Richard T Kelly at 15:56:00 No comments: Links to this post

No Child Left Behind...

Last week my wife and I were given a guided tour of a primary school at which we may want to try to seek a place for our daughter. And so I felt cold fingers close round my heart... Absolutely nothing to do with the school itself, which seemed an entirely first-rate establishment, full of well-behaved kids and lively teachers and fine facilities, a place any parent would be pleased to send their child in the hope that they'd be well educated and... 'happy'?
But there's the rub. It just seems to be a core existential moment, this: the dawn of the commencement of your child's formal schooling, following fairly hard on the heels of their getting the knack of talking. And whatever the ostensible merits of what you're presented with on your First School Tour, larger and more complicated thoughts are liable to obtrude, forcibly and perhaps for the first time - thoughts to do with your child's capacity for happiness or sadness, their willingness (and their ability) to function and to develop when separated from you, whether they will be liked and appreciated by their peers and teachers, whether they will struggle, socially and/or academically...
But there's no turning back or not facing it, is there?
'My mother groaned, my father wept / Into the dangerous world I leapt...'
Posted by Richard T Kelly at 15:26:00 No comments: Links to this post

I have my Dad to thank for the fact that I've managed to read some Updike: a compendium of the Rabbit novels, plus the virtually cuboid reviews-and-essays collection Odd Jobs, are items on his shelves at home, and I ploughed through them all on some vacation past within the last ten years. As such, most of what I've read about Updike in terms of criticism (including the obituaries of the last two weeks) has felt quite familiar. Clearly a brilliant craftsman of mellifluous, well-minted prose; clearly a keen, shrewd, non-doctrinaire eye on American society and its politics; clearly someone who knew (or made it his business to learn) many useful things about the world, and incorporated them artfully into his fiction. And, clearly, someone much preoccupied with women and their most secret places...
Actually, strictly speaking, the first time I read anything of Updike's was by way of the extended extract from one of his lesser-known stories that is quoted, at length and admiringly, by Tim Madden, narrator of Norman Mailer's Tough Guys Don't Dance. The extract in question is a paean to the poetry and mystery of the female groin, as you might say... I'm coming over bashful here, as Updike clearly never did. But when I think about Updike and my chief feelings about his work and its ambience, the one image that comes to me repeatedly is that of a working man of midlife vintage, looking discreetly but firmly at his neighbour's wife, and - if not entirely coveting her - then certainly giving her provisional marks out of ten, and imagining how he might go about verifying his estimate.
My wife and I were talking about the Updike obituaries in the car the other day, and she mentioned that there was a seeming consensus around the view that post-WWII British fiction had no novelist quite comparable to him. Interesting. Of course the thing with Updike is that he was very clear about his attachment to bourgeois subject matter that might seem overly domestic and common-coin to some sophisticates; and yet clearly he scrutinised it and poeticised it in a style far surpassing most writers' attainments in the same area. Britain, of course, has no end of bourgeois novelists passionately attached to that segment of the class system that best suits them. But the difference here is that Updike's protagonists tended to do regular jobs (often of the sort imagined to induce 'quiet desperation') rather than being, say, writers or academics, which is a depressingly regular occupation for the protagonists of British literary novels. Not that Updike was any sort of 'common man' or fixated on same; but he always seemed happy to have his hands dirty with the raw stuff of life, albeit in a highly elegant sort of a way...
Posted by Richard T Kelly at 15:22:00 No comments: Links to this post