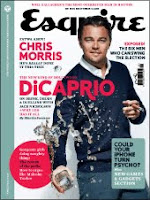 Leo DiCaprio is the cover star, looking like a swinging kind of guy. Inside is a rare sighting of Chris Morris, also a spot of erotic finesse courtesy of Rankin. My column is about Paul Greengrass's Green Zone, of which I say:
"One can imagine a great Greengrass movie shot at the eye-level of one soldier amid the fog of the war, trying to see his way through the morass. But the visual signature of Green Zone is a grand aerial shot across Baghdad, signifying that Greengrass and his writer Brian Helgeland (LA Confidential, Mystic River) have an overarching theory about the invasion of Iraq – one that tends heavily toward conspiracy..."
John Rentoul, who hasn't seen Green Zone, is nevertheless on the right track with his suspicions of it...
Posted by Richard T Kelly at 02:18:00 No comments: Links to this post 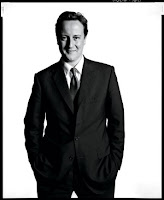 On last week’s BBC1 Question Time Boris Johnson made one remarkably graceful and responsible intervention on the issue of the anonymity of Jon Venables and its impact on the public purse. He correctly cited the case of Mary Bell in arguing that the justice system should run its course. (In doing so he left sadly isolated his supposed co-thinker, the ridiculous Carol Vorderman, who was once fancied to be clever in a country clearly poor at maths, then became a TV-ad shill for ‘secured loans’, and now seems to have exposed herself conclusively as a shrill nitwit.)
That Johnson made his point succinctly was a miracle in itself, because for the remainder of the programme he talked his usual blustering, waffling, would-be-endearing nonsense and was quite often allowed to get away with it. But on the issue of defence spending a spirited young woman in the audience told Boris that if he didn’t know what he was talking about then perhaps he should shut up. And Dimbleby had him squirming ineffectually in the effort to deny that he has not, at times, through public utterances at odds to the party line, ‘undermined’ his party leader and fellow Etonian/Bullingdon alumnus Dave Cameron.
Anyhow Boris is rumbled again, and by his own utterances – surprise! – in this month’s astute Vanity Fair profile of Cameron by Michael Wolff:
"Cameron “alchemized a position of more or less glutinous consensus,” says Boris Johnson, whose own relationship with Cameron tiptoes a fine line between admiration for his evident electability and doubtfulness about his intellectual bona fides… “The lion lies down with a lamb, calf, and fatling together, and a little child shall lead them,” says Johnson dryly…"
Yes, comrades, this man still wants to be Prime Minister - nay, truly, madly, deeply believes he should be. On BBCQT he claimed frothingly that he could hardly countenance why on earth the British public might even consider plumping for Gordon Brown on May 6. That would indeed be the world turned upside down and God turfed out of his Heav'n, Boris old bean, what what?
(Vanity Fair's portrait of Cameron reproduced above without permission is, of course, by David Bailey.)
Posted by Richard T Kelly at 16:32:00 No comments: Links to this post

The Spiderman mask secreted by Jonás Gutiérrez snugly inside his jockstrap, to be produced and worn only for goalscoring celebrations, was one of the many grim jokes of Newcastle's relegation season of 08-09, mainly because we never saw the beggar once all bliddy year. Such was the Argentine's failure to deliver 'end product.' All smiles, though, after Saturday's tonking of Barnsley, Jonas's wonder strike for the fourth goal, and the SJP debut of The Mask, which, Jonas freely admitted, had been smelling a bit rank after all that time spent down south. Worth the wait, though. NUFC is the sort of club that deserves its own mercurial/erratic South American midfield wizard, capable, at moments of inspiration, of resembling a skinny Mexican superhero-wrestler. Fair play to Nicky, Kevin, Alan and all the northern lads but you do want a spot of 'Julio Geordio'-like diversity in your Magpie squad.
Photo (c) ACTION IMAGES
Posted by Richard T Kelly at 02:42:00 No comments: Links to this post