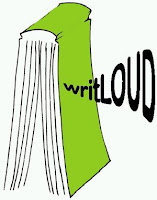 Writloud is a monthly readings event in London showcasing both new writers from Birkbeck College’s Creative Writing courses, and established authors. (Writloud guest authors to date have included Jonathan Coe, Hari Kunzru, Russell Celyn Jones, Peter Hobbs, Benjamin Markovits, Kate Pullinger and Helen Simpson.)
Their next event they kindly bill as being with "guest writer Richard T. Kelly, author of the acclaimed debut novel Crusaders (Faber, 2008) and of four non-fiction books on film and film makers."
Time and place is Monday 11 August, 6.30-8.15 pm, RADA Foyer Bar, Malet Street, London WC1E 7JN. Admission is free of charge, but with a suggested donation to Oxfam of £3.50. To reserve places in advance, email writloud@aol.co.uk.
Posted by Richard T Kelly at 09:36:00 No comments: Links to this post