This is a story I have about the late and rightly lamented Harry Dean Stanton, who died on September 15 at the age of 91. I met him one evening in Los Angeles in October 2002, when he’d have been 76?

I’d spent that afternoon very cheerfully in the old port city of San Pedro, with Linda Bukowski, widow of the legendary Charles. It was a special afternoon for me, having got a great deal of fun out of Bukowski’s writing during my youth, to pass some hours chatting to Linda in the home she and ‘Hank’ had shared, site of so many escapades. We had a couple of drinks: I was on beer, but somewhat cautiously, as my next appointment was to meet Mr Stanton at his home on Mulholland Drive.

I was aware he wasn’t widely thought to be the easiest man to get to know. I knew Charles Bukowski had said as much to Film Comment magazine back in 1987: ‘Harry Dean’s a strange fellow. He doesn’t put on much of a hot-shot front. He just sits around depressed. And I make him more depressed. I say, ‘Harry, for Chrissakes, it’s not so bad.’’

But Linda knew him well, of course, and assured me all would be fine. She even rang him as I was packing up to go, and told him to go easy on me: ‘You be nice to him now, Harry, OK?’

The skies were still light, or as light as Los Angeles gets, when I left San Pedro, but it was extremely dark by the time I was winding my way down round Mulholland Drive, which had very surely taken on the menacing aspect of a place where David Lynch might shoot a movie.

Harry Dean’s place was a bungalow. I had to step cautiously down flagstones overhung by trees in order to get round the back of the place and ring the doorbell. Before I got there something dark and small darted across my path: in my mind’s eye I remain convinced it was a raccoon.

Harry Dean answered the door in bathrobe and slippers, spectacles on the end of his nose, hair a little wild. He welcomed me in, though there was a wariness to him, a certain senior stiffness. Still his living space was nicely arranged for a cordial chat, big sofas squared round a big coffee table with a big ashtray. In fact I admired his bachelor pad all the way round: open plan, cosily masculine, done in russet shades, a tidy kitchenette behind me, while I could see that to the right of the front door was the master bedroom: a tall mirrored wardrobe door hung open.

He didn’t seem keen on interviews - the legend was all true. He asked me to prove to him that my tape recorder was really working. He wasn’t sure I knew his body of work and needlessly listed the directors he’d done time with – Hitchcock he seemed especially proud of. Of course, if we’d had time I would have gladly enthused about everything from Missouri Breaks to Young Doctors in Love to Fire Walk With Me.

Then we were done. He told me he was ‘going out’ but I was welcome to hang awhile, and that we might 'have a drink' once he was dressed and ready? So he pottered off to that bedroom. I checked my tape recorder, reviewed my notes, looked back on my busy day. That was ten minutes maybe. Then Harry Dean re-entered, newly purposeful.

The phrase that leapt into my head, honestly, was ‘Alley Cat.’ (‘Rat Pack’ might have been in there, too.) The man was dressed sharp; and he was tapping a cigarette on a silver case. He’d donned a black suit and a crisp shirt, tie with clip, shoes with a high sheen; and the hair was now slick. Now he was smiling a great deal, like everything amused him, since it was time to ‘go out.’ And I felt I understood it all now, including the story about the date he'd brought to Sean Penn’s wedding in 1985. He fixed us vodka tonics, plenty stiff, and the evening got yet more memorable.

So count me in as a big, big Harry Dean fan, all the way. Too many superb performances to cite, but my favourite, if I had to pick one, is this – this scene, especially.

The Polyglots by William Gerhardie; and my part in its persistence 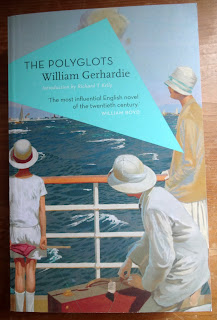 Earlier this decade I had a stint as publishing editor of a list dedicated to the reissue of neglected or 'lost' books of distinction: Faber Finds. One of the eminent long-gone authors under my wing was William Gerhardie, he of Futility, Doom, The Polyglots, Resurrection, Of Mortal Love, Pretty Creatures, My Wife’s the Least of It, Pending Heaven, Memoirs of Satan, et cetera.

But possibly you're rubbing the chin now, wondering if this is a name and an oeuvre you've ever come across before... Don't worry, that's fine. Michael Holroyd, who has worked diligently to improve Gerhardie’s reputation, once hymned him as a writer ‘whose books need to be rediscovered by each new generation of readers.’ And there’s the difficulty: Gerhardie has become the near-archetypal ‘lost writer’, and readers just have to keep rediscovering him.

Blessedly, the house of Head of Zeus has now reissued Gerhardie's most widely admired novel, The Polyglots, in a new trade edition, and they were so kind as to ask me to write an introduction (the opening gambit of which is below.) In tones dreadfully familiar to most working novelists, Gerhardie once lamented that The Polyglots had earned him ‘something equivalent, in terms of royalties, to nothing.’ But it lives, it survives to speak to us still.' 'All great writing,' George Steiner insisted, 'springs from le dur desir de durer, the harsh contrivance of spirit against death, the hope to overreach time by force of creation.' And that's what it's all about. 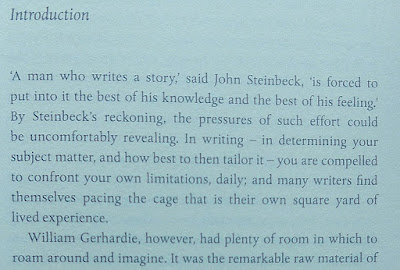