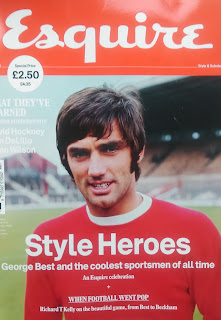 I haven't written about football at any great length since this, about Zinedine Zidane in 2006, but I'm pleased to report that I have another long piece about another truly great player - George Best - in the new Esquire. The Best essay is rather more concerned with class and culture and money and celebrity in the UK over the last 50 years than it is with what goes on inside the mind of a true master when he's out in the middle of the park - which was and is my interest in the great Zidane. But Best's gifts have been well examined, I have to say, and remain available to the eyes of newcomers on tape. What has happened to the national game in light of socio-economic changes in wider British society still has work to be done on it, in my view, and I will have more to say on that myself in a new book next year.


In footballing terms, though, there's just one thing I'd want to add to what's printed in Esquire, related to this notion of a comparison between supreme athlete and megastar musician that has advanced with the more the former receives in remuneration and adulation. The performance anxiety of a footballer ought really to exceed that of any rock star: the crowd is tougher, plus there’s an opposition whose job is to stop you playing. But Best relished adversity. In the European Cup Final of 1968 against Benfica, he was targeted, fouled, and repeatedly felled – a lesser man might have been psyched out of the game. Instead Best scored a crucial goal that put Man United on the way to their first European trophy. Not just a pretty face, to put it mildly. 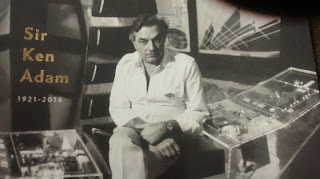 Adam had quite some twentieth-century life experience before cinema. A German Jew who fled Berlin perforce in the 1930s, he served with valour in the RAF (the story is here), and one of the most memorable tributes on the night came from a current senior officer in 609 Squadron.

Among a few paeans delivered on film – Roger Moore was dryly funny, I must say – the most thought-provoking was perhaps from Lord Foster, who sounded truly enthused about the notion of an alternative history of architecture, based on the influence of buildings that were never actually built – or, rather, fabricated only temporarily, on a sound stage, as imaginative space for scrutiny by a camera lens. Any film-goer can name a favourite edifice in this regard, a space they would love to have inhabited or visited, except that it lives only in cinema. (Apparently Adam’s widow Laetitia would get quite emotional come the day of shooting day on any given Bond picture when an action sequence called for some glorious set of her husband’s to be blown to bits.)

I explored my own passion for production design in my long biographical study of Ferdinando Scarfiotti, and pictures that he designed as diverse as The Conformist and Scarface still work that sort of wish-you-were-there enchantment on viewers.

Alan Bennett, who became friends with Adam in the filming of his Madness of King George, attended the tribute in person and spoke intriguingly of a unique feeling he’d had and professed to not quite understand – namely that knowing Adam had made him feel part of a ‘European culture’. I briefly thought this might herald some reference to the EU referendum, but Bennett left the sentiment there, and it resonated. When the lights came out and I wandered out with the filmmaker friend who’d invited me long, we shared a few wistful thoughts of the ‘they don’t make them like they used to’ variety, related both to movies and to people. There’s an obvious aesthetic to the old movie world of built sets and spaces dressed for celluloid, one that gains lustre as more and more films are very evidently made by computers. And there’s no point being overly nostalgic for the sorts of costs that the old studio-style model necessitated.

But cinema is the supreme time-based art form, and so many pleasures, even of a melancholy variety, derive from that very truth.

A still-neglected piece of Adam finery (fine work, indeed, from the whole cast and crew) is Pennies From Heaven (1981). This is the sort of thing I’m talking about.