In praise of a pervasive sense of evil - Gothic: The Dark Heart of Film (A BFI Compendium) 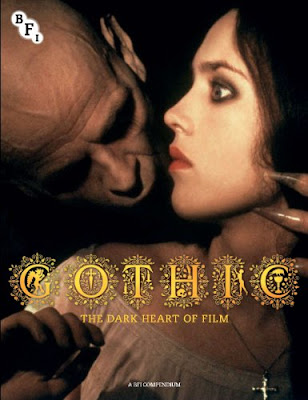 I have before me the newly published Gothic: The Dark Heart of Film (A BFI Compendium). It’s a remarkably handsome volume and, I’d have thought, a must-have for enthusiasts and students in this ever more ardently studied field. But then 'we are for the dark', as Shakespeare had the serving maid say to Cleopatra.

I contributed a chapter to the book (on Satanism and witchcraft, naturally) but it’s really not for that reason that I consider the work overall to be essential. I’m just a one-time gothic novelist, not truly a specialist in the discipline; however, inter alia, fellow contributors such as Guillermo del Toro, Marina Warner, Christopher Frayling, Kim Newman, Anne Billson, Mark Gatiss and Ramsey Campbell most eminently are. The richness and variety of this collection, expertly assembled by the BFI’s James Bell and superbly illustrated to boot, are to be savoured, in more than one sitting.

The book marks a BFI season that begins shortly and will run into 2014. A fine taster of what lies in store was offered at the end of August with a 'Monster Weekend' of special screenings in the forecourt of the British Museum: I went along to the first of these, the movie being Tourneur’s Night of the Demon, and thought it a really delighting occasion.

I notice that I’m using a lot of ‘pleasure-words’ in relation to the gothic here, which, funnily enough, is the spirit in which I wrote my chapter for the book. For a long time I more or less believed that the whole origin of the horror genre was quite aptly encapsulated by the ‘celebrated’ line from the Catholic Office of the Dead, ‘Timor mortis conturbat me’ (‘The fear of death disturbs me.’) Our mortality, and that of those whom we love, is after all the best if not the only thing in this world to be afraid of.

However, horror consumed as a cultural experience clearly has to offer pleasure of sorts too, even if a somewhat masochistic one. Horror might be said to indulge a certain phantasy about the existence of wickedness and depravity in the world: how it might indeed triumph over good, or how, at least, certain souls (deserving or not) could succumb to it. In the process, wickedness and depravity may be dressed up with certain superficially alluring aspects – and when it comes to such costuming, cinema is supreme among the arts. But at such a puppet show it’s easier to spot the strings.

There are many aspects of the gothic that have great powers to haunt and disturb and unnerve us, and gothic works that invoke devils and demons and necromancers (what I thumbnail in my essay for convenience as ‘the gothic occult’) are by no means excluded from that. Their particular powers, though, feel to me a tad reduced. The gothic occult is predicated on the existence of evil as a metaphysical force in the world: a thirsty evil, one that wants to keep its infection spreading. A really bleak gothic occult will propose a black pessimistic view of Man's Fate – that the material world belongs to Satan and goodness is unattainable, on this plane at least, etc. That all sounds scary enough on paper, and can be so on screen.

And yet this particular version (or explanation) of a metaphysical evil seems to me to require – how can I put it? – a more than usual bound into the suspension of disbelief. By contrast, the idea of a ‘ghost’ – where a ghost might come from, what it might look like, what its motives might be – seems to me endlessly recyclable and potentially mysterious, fit (if the mood is right) to inveigle itself even into our wide-awake rational thoughts. Ghosts appear to me as the absolute lifeblood of the gothic. But then to speak of devils, of Satan... of a personification of evil, an antagonist to some almighty king of the heavens, a figure at the head of a large hierarchical structure committed to humanity’s ultimate catastrophe – well, this is to confront the reader or viewer with a heftier (and consequently less nimble and persuasive) proposition. Having written a novel in the Faust mode I appreciate the size of the ask, and accept that one’s first duty under these conditions is to entertain.

The best, most persuasive work of fiction that I know of to imagine Satan’s immanence in our world is Norman Mailer’s The Castle in the Forest (which is also perhaps the most decidedly gothic title anyone could ever append to a novel.) If I can’t immediately tempt you to read it, please try this superb interview with Mailer about the novel, written up by Philip Weiss for the New York Observer. And do keep your eye on #bfigothic.

A footnote: when I was readying my Gothic compendium chapter for the presses with BFI editor James Bell I was not surprised and quite amused to hear from him that I ought to try to trim back on a rather prolix attempt I’d made to define exactly what constitutes the gothic in cinema. Apparently, more than one of my fellow contributors had fallen down the same dark well... and the effort is probably doomed, one has to say. There’s nothing exactly Gothic in cinema, but it’s generally agreed that we seem to know it when we see it, or feel it. Gothic is a visual style and a mood, an atmosphere, enhanced above all by production design – one of gloom, intrigue, dread, a pervasive sense of evil, which may well (but need not) materialize in outright horrors. In the case of the gothic occult, this production design tends to dark secret places where cabals gather and rituals occur, the solemn black mass and the orgiastic walpurgisnacht. And there you may also see the goat’s head and the horned man, the grimoire, the beckoning finger of Mephistopheles – all that...
Posted by Richard T Kelly at 07:53:00 No comments: Links to this post