A few things about The Knives 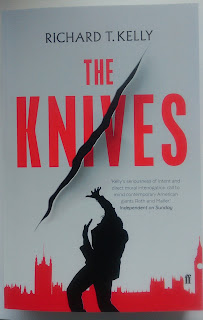 1. My novel The Knives is published this Thursday, August 4. I first began thinking about its subject in late 2009, and wrote a fledgling version as a prospective short-form Channel 4 drama. My interest had been stirred by some of the very public political/moral dilemmas facing the then-Labour Home Secretary Alan Johnson. That interest deepened when I read David Blunkett’s lengthy and detailed published diaries. I wondered what it would mean to discharge such duties - to walk a mile in those shoes, imaginatively.

2. I began to plot out a long-form story about a flawed man doing a legendarily difficult job, mired in crises both professional and personal – a Home Secretary with no home of his own. Since governments come and go, and since a writer's job is to make things tough for one's characters, I soon knew that my protagonist had to be a working class Conservative, in a north of England constituency, who had served in the army. By 2010 I had a title for the piece, Homeland, but I was just too slow out of the blocks on that score.

3. Research proper on the novel, both from written sources and by going to people and places directly, went on from 2011 right up to 2015. In real life, and for all that the job is considered a poisoned chalice or gilded coffin, Theresa May endured as Home Secretary throughout those years – right up to her recent promotion. Her discharging of duties at Marsham Street was of obvious interest to me, as it has been to journalists on the Westminster beat, and never more so than now. (Andrew Rawnsley’s piece on May and her circle of advisors in last week’s Observer is a very good and insightful place for newcomers to start.)
4. The Knives, though, is fiction. It’s not based or modelled on anyone, it’s no roman a clef. It does, though, aspire through a story to offer some plausible dramatic scenarios and imaginative truths about arguably the hardest office in politics - and its complex relation to this nation of ours and her citizenry.

5. The novel is dubbed a ‘political thriller’, essentially for shorthand purposes. I would see it as a drama that’s intended to grip: a Scandinavian boxset of a novel, if you like, with multiple concurrent plotlines and themes. I would be really pleased if admirers of the TV series Borgen found it of interest. Like my first novel Crusaders, The Knives tries to address some national themes of public interest, in a dramatic manner. Like Crusaders, it’s in the last act that the thriller elements coalesce - the clock begins to tick for the central character, and the train drives down one track to the denouement.

6. I guess there’s a certain timeliness in a novel about a Tory Home Secretary who's widely fancied to become Prime Minister appearing at this moment – amid a year of politics that has been more interesting than many of us would have liked. The book perhaps foreshadows a few things that have become reality. In at least one regard I wish they hadn’t.

7. In a time of political tumult and crisis, like this one in which we’re currently enveloped, people who read a lot can be forgiven for losing their heads in angst and dread; and fiction has a hard fight to show it’s more useful for what ails us than Twitter. But it’s a worthwhile fight, nonetheless. Of course there is a living to be had from arguing that whatever’s happening today is the definitive episode in human history. But it isn’t. Ecclesiastes got that dead right.

8. The EU referendum result defenestrated a Prime Minister and cleared out more than one of his self-styled successors. The ambitions of Cameron, Johnson and Gove, and the popular failure of the case for Britain to remain in the EU, have been shut down, shuttered and bolted: the narrative of those events has already been well told in journalism, and no doubt there will be a non-fiction book or two to follow.

9. Still, our oft-maligned political system managed to propel the most capable candidate into Cameron’s place, once the blatant hoodwinkers had fallen away. The aftermath of that referendum vote, however, will be long and painful, and will define the premiership of Theresa May. The problems that faced her as Home Secretary over six years – inter alia, levels of immigration, varieties of alienation in England’s regions, forms of English nationalism, concern for England’s identity and the threat of 'domestic extremism' in various forms – have, I think, a fair bit to do with why England voted as it did on June 23. The Knives is certainly much preoccupied with such matters. My fictional Home Secretary David Blaylock has his (invented) Westminster constituency on Teesside, where all areas voted to leave the EU by over 60%.

10. In terms of government, such deep-rooted and persistent problems appear to be the burden of the Conservative Party, since Labour has, for the time being, abandoned the business of real politics. And the troubles are not going away – we will reckon with them for years to come. Fiction, I believe, has a part to play in the reckoning, and I wrote a piece for the Guardian last week on how novelists have borne witness to politics down the years – as ‘unacknowledged legislators’, if you like - certainly as watchmen, interpreters and dramatists of our predicaments.
Posted by Richard T Kelly at 01:03:00 No comments: Links to this post