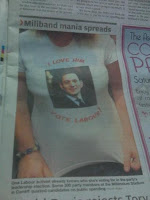 "This is where I'm from and Newcastle are the only team for me."

These, the words of Andy Carroll, as reported last weekend, Andy seemingly having decided to resist the mighty lure of Stoke City, and whatever Stoke has to offer by way of nightlife. Well said, Andy lad - now don't ever make us doubt you... And if you could see your way to a towering header for the winner at Old Trafford on Monday August 16 then I'd carry you into the Blu Bambu on my own bliddy shoulders...
Posted by Richard T Kelly at 15:40:00 No comments: Links to this post