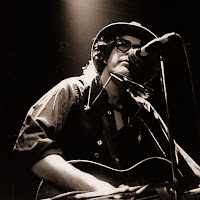 Peter Case: in what I remember as a little conference suite with rush seating in the back of a quite posh hotel near the sea in Dun Laoghaire, Eire. It was either some time around the year-end of 1986, or the spring of 1987, though I do suspect the former. At any rate, I was 16.


I recall that Case in the flesh looked a good deal more bohemian (specs, scraggy hair, rumpled suit) than the highly styled troubadour on the cover of his newly released and eponymous debut album from Geffen Records. But, unaccompanied, he played those songs that I already loved - 'Echo Wars', 'More Than Curious', 'Three Days Straight' - and a few I didn’t know. He encored with his own take on Shane MacGowan’s 'A Pair of Brown Eyes', and even stepped off the stage with his acoustic guitar to pace up and down atop a row of spare chairs, cheered at every step.

Afterward I lingered backstage (which was a hotel corridor, basically), shuffling and eavesdropping as some more seasoned individuals managed to engage Case in conversation. ‘How’s T-Bone’s family doing, do you know?’ asked one. He was speaking of Case’s revered producer on the Geffen record, someone whom even I had figured as a musical legend, present at the Rolling Thunder Revue and the making of Heaven’s Gate, producer of Elvis Costello’s King of America, one of my other great favourite long players of 1986...

This is all coming back to me now because of belated efforts to catch up with Case’s subsequent career. The 2007 collection Let Us Now Praise Sleepy John has brought great pleasure. No surprise that Richard Thompson contributes guitar and vocals to one cut, or that Stan Ridgway (another of my great favourites etc etc) is thanked in the notes. And at times I do feel like I’m back in 1986, enjoying that first album.

And yet I see from Case’s website that the ‘styled’ nature of his first record is something he rues somewhat, though he pays great respect to his producer, who kept on to greater things (and whose unmistakably long black-suited figure I bumped into once at a Hollywood function circa 2002.)

This is what Peter Case has to say about 'Peter Case':

Q: How much did T-Bone Burnett shape your sound?
A: T-Bone's a great producer. I came to him with this whole vision of the songs I was doing, and we talked about it and came up with the idea of tribal folk, meaning using acoustic guitars with a huge groove in the back, which only made it to the record on songs like ‘Three Days Straight.’ But the fact is that I was deemed by the record company, and T-Bone, as being too primitive to even play on my first record.
Q: Does that go back to you being a rock 'n' roll folk singer, a real rollicking force?
A: On the first record, there are a lot of slick arrangements. There are even a couple of cuts that I don't even play on, I just sing…

Clearly the things you have to do to forge a viable musical career can be strange and taxing, maybe even infuriating. Maybe it was especially so in the mid-1980s... Case seems to have made the right choice to stay out of the mainstream and keep to his own terms, 'right' in the sense that the music has stayed true and top-notch. It's hard to imagine the mainstream could have made it any better.
Posted by Richard T Kelly at 05:11:00