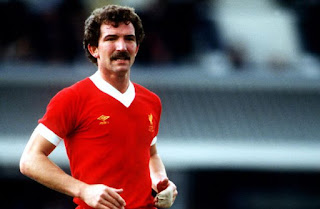 ‘We called him Sowness when he was at Middlesbrough.’ This, if I’m remembering right, was Bob Mortimer’s memory of how Graeme Souness was welcomed when he joined Jack Charlton’s team as a player on Teesside; and I think it’s true, because my granny in County Durham called him that and all - even when Souness was at Liverpool, skipper and top 'Jock' who could no longer be imagined to hail from anywhere other than Scotland.

You would tend to want to get his name right in person, I'd guess. There was a flair to how Souness carried himself on and off the park, but at Middlesbrough he acquired his principal reputation, for a flint-like toughness. What a player he was, though. ‘Most midfields are made up of a buzzer, a cruncher and a spreader’, Bob Paisley once observed. ‘[Souness] is all three.’ The crunching is what we recall most feelingly, maybe. But the ‘spreading’ was the flashiest element: Souness had a rare gift for abrupt switches of play from left to right through pinpoint flighted passes. He also rifled in some brilliant goals.

Souness is widely felt to have impaired his footballing reputation through management, even though he won a fair few trophies with various clubs. He alienated the Liverpool support by talking to the Sun after Hillsborough, though in 2011, however late it was, he made a pained and dignified apology. By the time he finished as a boss at Newcastle in 2006, though, it was clear that Souness felt the game had gone to the dogs, full of players to whom he wouldn’t have given the time of day when he was playing. But the modern manager simply has to finesse such matters, and Souness is maybe an arch example of a player who was too formidable an ex-pro to sit easily in the dugout.

Souness has just published a new memoir and I must say I enjoyed his previous ones. In an interview-feature with Souness for the Glasgow Herald, Teddy Jamieson does a good job of getting lines out of the great man and is kind enough to quote me appositely from Keegan and Dalglish.