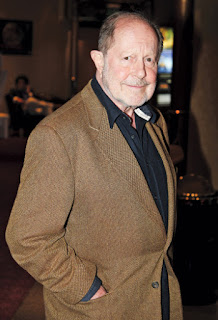 ‘When I was 12 years old,’ Nicolas Roeg said once - or maybe more than once? - ‘my father said the most extraordinary thing to me. “The day you’re born is your only chance to really have tomorrow, because by the day after you’ve got yesterday.” At the time it completely confused me, but gradually it began to make a little sense…’

Saying this to my tape-recorder, as it happened, Nic looked rather wry: however sad the sentiment, he surely knew that it constituted a little statement on the major theme of his art. For if cinema is – as art schools define it – a ‘time-based medium’, then he ranked high among those filmmakers who have articulated and poeticized our sense that time is really in the eye of the beholder. In Nic’s work the past, present and future seem to co-exist in the same fleeting instant.

Nic (who died yesterday, aged 90) was – is – a filmmaker’s filmmaker, in the sense that you’re better to measure his brilliance by the influence he exerted than on his box-office takings. He was so original and questing in his work that directors were bound to follow him, and to pay him that great tribute (hommage!) of stealing from his store of magic.

It’s analogous to how the best writing on Hitchcock is Hitchcock’s famous set of dialogues with Truffaut, and the best critical response to his Vertigo is the number of loving emulations of that movie by other filmmakers, rather than the stacks of academic monographs rehashing ‘reception theory.’ Nic’s personal testament, The World is Ever Changing, published by Walter Donohue at Faber in 2013, is the best thing you can read about him.

It might have been better for Nic’s career if all such debts had been repaid him in cash, but he always seemed – how should we say? – philosophical about it. The first time I talked to him at any length he remembered an early pre-release screening of The Man Who Fell to Earth after which his producer Michael Deeley enthused to him that, however the film might fare commercially, his peers would be ripping him off in no time.

I remember the day of that discussion really well. Finding his address in Notting Hill, just a few streets away from Powis Square. Climbing the stairs to his study, passing the framed Hockney Polaroid-collage of Theresa Russell as Marilyn Monroe, custom-made for Insignificance. The study itself, dressed from corner to corner with piles of books and objets d’art. I remember every encounter I count myself lucky to have had with a man who I basically hero-worshipped from boyhood.

The first being-in-the-same-room magic - round about now, only 33 years ago - involved my getting his autograph after a screening of Insignificance and a Q&A at the Queen's Film Theatre, Belfast. Theresa Russell was at his side; and had Jesus Christ chosen Belfast that night as the site of his Second Coming I really couldn't have been more impressed

In March 2009 BAFTA hosted a tribute evening to Nic as a means of bestowing their Fellowship upon him, and the banner they chose was 'The Magician With A Movie Camera.' BAFTA has a reel of highlights here. Danny Boyle and Duncan Kenworthy curated the evening and enlisted a great array of speakers, which I, by an immense stroke of good luck, was invited to join - to speak, I thought, on behalf of the fans in the stalls. So it was a very special and memorable evening - for the honouree, I’m sure, and for all attendees, I hope. Certainly for me.

Nic was – is – as brilliant a filmmaker as Britain has ever produced, the golden era of his work (roughly the 20 years from 1966-1985) standing comparison to the best of anybody else's ever. It’s true that many fans rated the later work less glowingly, and I think that disappointed Nic, as it would any artist. ‘It began to annoy Welles,’ he told me. ‘The Magnificent Ambersons is a huge movie, but all people would say of it was that it wasn’t Citizen Kane.’

Anyone who ever 'interviewed' Nic had a similar sort of experience: you didn’t quiz him, you just listened, and tried to follow his associative leaps. John Huston, very different but also a bit of a magician, seemed to crop up in his conversation a fair bit; Nic especially liked to use Huston’s analogy of making movies as:

‘rather like being the mayor of a mining town – everybody’s working long days to the same end, there’s fun to be had. Then the mine closes, the population leaves, the town is deserted and the director is the last person left. Huston said, ‘Taken all in all it’s a rather melancholy affair.’ It is a loss, curiously, the end of a film – because your life has been in it. Your personal life is put aside. It’s a cliché but the films are like children. I don’t have a favourite, they’re all of a time and that time has gone by.’

He was quite enthralled by the i-Phone and ever-evolving possibilities of image capture, while being truly perplexed by the extent to which people persisted in putting movies together by the same old ways. ‘The weird thing,’ I recall him musing, ‘is that one’s grandchildren will say, ‘I don’t get it, what is a ‘film’? Why was it ever called ‘film’?’ You can start explaining about celluloid and light and they’ll say, ‘Oh…’’

Already I’ve had such conversations with my children – time's like that – but Nic’s films are going to endure. The pictures he made were just so strong and vivid and irreducibly part of him, right up to the point where they crossed over and became part of us.
Posted by Richard T Kelly at 04:50:00