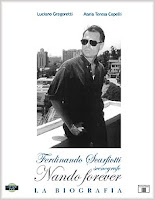 One of the many incidental pleasures of my recent sit-downs with Sean Penn - in Dublin for an update of His Life and Times, then in New York for an upcoming magazine profile, both times on the set of This Must Be The Place - was the customary occasional discussion of films and filmmakers. For instance, in NYC we fell to chatting about Paul Schrader, his scripts for Taxi Driver and the far less luminous Rolling Thunder, also his directorial gift for designing title sequences (cf. Blue Collar and American Gigolo.) Mention of Gigolo, though, got me thinking back to that film's pristine design by the late, great Ferdinando Scarfiotti, longtime collaborator of Bertolucci (The Conformist, Last Tango in Paris, The Last Emperor) and Visconti (Death in Venice plus numerous operas.)

When I was a research student at the British Film Institute in the mid-1990s I wrote a thesis on Scarfiotti and his work, to which Bertolucci and Schrader, inter alia, kindly contributed in loving memory of their friend and colleague. It seemed to me then that said thesis, however 'provisional' in its interview-derived biographical data, was the only substantive work on Scarfiotti in any language, albeit available only via the BFI library and in a truncated version courtesy of the scholarly journal Critical Quarterly.

Happily, however, that has changed: Zecchini Editore of Italy have newly published a biography/tribute called Nando Forever: what looks to be a very handsome tome, with a DVD attached, compiled by Luciano Gregoretti and Maria Teresa Copelli. And by the sounds of it this is just the commemorative/celebratory volume that this brilliant and unsung film artist has long deserved. The following trailer for The Conformist shouldn't really be listened to (dubbing!), enjoyed rather for the parade of imagery for which Scarfiotti gifted Bertolucci such a rich foundation through his exquisite design choices.