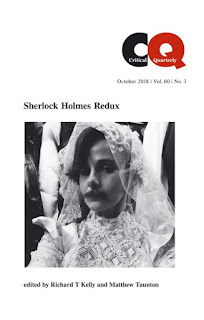 Critical Quarterly is a fine literary journal founded in the late 1950s by C.B. (Brian) Cox and A.E. (Tony) Dyson. Cox – a scholar and poet who was soon to become a leading figure in the national debate about education – was an avowed believer in 'the moral importance of literature,' with a particular love of poetry and a passion for ensuring that good contemporary writing had its day n the sun, rather than suffering in the shade of the Great Tradition.

The brilliant Colin MacCabe became CQ’s chief editor in 1990; and I’ve had the privilege of seeing my work in the journal’s pages since the mid-1990s. Matthew Taunton, Senior Lecturer at UEA, is now CQ’s deputy editor, and he and I worked together very happily as co-editors on the journal’s latest number, Sherlock Holmes Redux: a revisiting of Conan Doyle’s deathless canon and some of the many intriguing variations still being played within it.

Matthew took charge of a number of critical commissions, new writings on Doyle’s Sherlock, and those fruits are as follows:

- Daily bread: food and drink in the Holmes canon by Simon J. James
- Sherlock Holmes and risk by James Purdon
- Holmes the narrator: ‘Here it is that I miss my Watson’ by Lauren Owen
- Fair exchange?: Between the afterlives of Holmes and Raffles by Matthew Ingleby
- Escaping the Strand: the paratextual Sherlock Holmes by Katharine Brombley

My side of affairs was a sequence of interviews with creative individuals who have produced adaptations of Sherlock designed for contemporary audiences; and I threw in an essay of my own about the strange case of Sherlock and his famous contemporary Dr Freud of Bergasse 19:

I recommend the whole package unreservedly to anyone with an interest in Holmes, the crime-detective genre, 19th-century literature more generally, and the crafty creative business of adaptation. On that score I also recommend Jonathan Barnes' raft of new Sherlock audio adventures for Big Finish; Sarah Perry's new Holmes story ‘The Problem of the Kentish Ghost’, written for Sophie Hannah’s compendium Deadlier: 100 of the Best Crime Stories Written by Women; and, of course, Louise Brealey’s performances as the intriguingly non-canonical Molly Hooper in the BBC series Sherlock. Louise is also our edition’s cover star, and living proof of the novel transformations that still exist to be wrought upon the great consulting detective.