David Cameron: His To Lose... 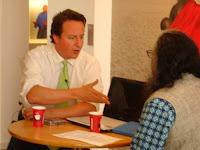 I hope to be writing about this at length in print quite soon, but after Glasgow East are we looking at a slow grind to the succession circa 2010, as we had after Blair won the Labour leadership in 1994 while Major and his lot fell apart? If so, what are the possible impediments? Depends where you're looking from. The estimable Denis MacShane MP (Labour, Rotherham) wrote in the Telegraph at the weekend, "David Cameron's problem is that nearly all his senior shadow ministers and aides come from a narrow elite of wealth with no worries about mortgages, pensions or education costs." But then how many of the Labour front bench these days can claim to be Of The People in this manner either? To discuss...
Posted by Richard T Kelly at 09:22:00