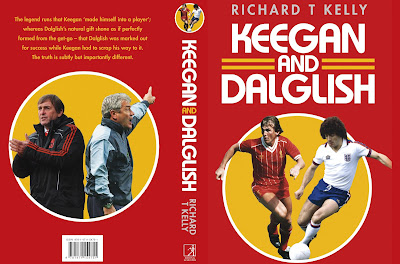 From the Introduction to my new book, available from tomorrow:


Across 50 years the careers of Keegan and Dalglish have shadowed and mirrored one another, both for good and for ill. Now in their mid- sixties, they are elder statesmen – resemblances to their shaggy- haired Panini portraits of the 1970s long faded. Keegan now wears a trim crown of grey and a perpetually rueful mien, while Dalglish has grown a face of quintessential Glaswegian cragginess.

They are two highly talented, quietly complex men from equally unglamorous backgrounds, born in the same year, who ascended to superstardom almost in tandem. Their playing styles were notably different, as thumbnailed cannily by Dalglish: ‘He ran onto flicks, while I went about my work slightly deeper.’ But though as players (and again as managers) they were on opposing sides, they served the same clubs at different times and seemed not ‘rivals’ so much as exemplary figures in the game, capable of inspiring youngsters and fans not just by heroic feats on the pitch but by rigour and dedication on and off it.

Keegan and Dalglish were football royalty, sporting kings – as intensely revered as any players these isles have produced. And yet, having made their names and reputations in the 1970s and 1980s, they would become recognisable to the next generation as top managers – albeit more fretful, troubled figures, given to big gestures and stunning departures. Both men acquired airs of enigma, as a consequence of strong- willed decisions made in private then dropped onto the heads of a startled public.

What had kept them both in football so long? The love of a club, and a principled, even romantic vision of how the game ought to be played? That’s what some hardcore supporters believe, and there’s evidence in their favour. But the desire to remain a big player on a big stage, the interest in a big paycheque, the resumption of old rivalries and unfinished business – these things, too, may have had their pull, serving to draw both Keegan and Dalglish into a Faustian pact...